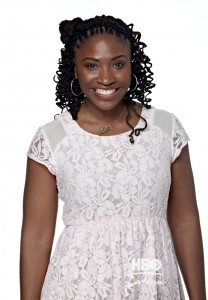 For Brooklyn resident Kadine Anckle, her upcoming appearance on the most recent installment of HBO Latino’s “Habla” series is the latest development in a wild and wonderful journey that started far from this bustling borough she now calls home.

Born in Panama City, Panama, Anckle let her imagination soar as a child. But back then she never dreamed that she would one day trade the idyllic, grass-lined walk behind her grandmother’s house in Juan Díaz for the frenetic, people-filled streets of New York City… and a turn in front of the camera.

“I’ve always been on a path and never known really what it was or what it is supposed to be, but I certainly recognize that this show is a part of it,” Anckle explains. “I’m really honored and it feels good because it is just me being myself.”

The Brooklynite is one of 18 Latin talents featured on the show, entitled “Habla Women”, which debuts April 18 at 8 pm ET on HBO Latino and will also be available on HBO On Demand and HBO GO. The program, which marks the 10th anniversary of the “Habla” documentary series, is being billed by HBO as a “no-holds-barred installment” that will present a “uniquely Latina view of life by exploring the attitudes, perspectives and accomplishments of 16 exceptional Latin women and two Latinos living in the U.S.” A multitalented creative in her own right, Anckle joins a notable ensemble that includes actress Gina Rodriguez, Olympic boxer Marlen Esparza and chef Daisy Martinez.

As the only Afro-Latina to appear in “Habla Women”, Anckle is grateful she could give voice to an experience that is often overlooked in the United States. “When you take me in at face value, you think, ‘oh, she’s a black woman,’” Anckle notes. “But I was born and lived in Panama until I was 10 years old… I am a Latina and I get that it’s not what you expect, but it certainly is my reality.”

Anckle hopes that by sharing her story with a wider audience via “Habla Women”, she will not only be able to provide an explanation of the Afro-Latina experience for people who haven’t lived it – but also bolster the spirits of those who have. “It is a war cry for all the women who are like me because nobody pays attention to us,” Anckle says. “So many people just don’t know that we exist.” 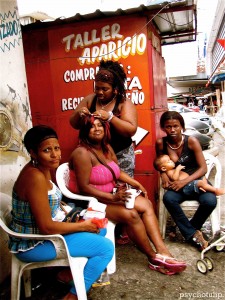 During her childhood days in Panama, Anckle longed to see faces like her own on television. “If you are growing up and you don’t see anybody that looks like you in any kind of media, then you start to think there is something wrong with you,” she says. When her family relocated to the United States, settling in the suburbs of Pennsylvania, Anckle was greeted by a supportive circle of relatives but still struggled with moments of self-doubt. “If there is a certain definition of what beautiful is and it doesn’t look anything like you… it messes with your self-esteem,” she recalls.

A gorgeous and gregarious woman who exudes confidence and charm, Anckle credits her family with giving her the strength to battle those insecurities and advance forward in the direction of her dreams. “I am my grandmothers’ granddaughter, I am my mother’s child, I am my sisters’ sister, that’s why I am who I am,” she says.

Raised by a mother who drilled the importance of education into her daughters’ heads, Anckle became an accomplished student at the Catholic high school she attended. Though Anckle still felt somewhat out of place, her mother constantly reminded her that all else was secondary to scholastic achievement, often chiding her that “a girl child is nothing without her education.” As she neared the end of high school, Anckle really found her groove and enthusiastically participated in student life – only to be told she couldn’t return for her senior year because her family could no longer afford tuition. It was a devastating moment in her life, but Kadine’s family stepped up to support her once again and she graduated from the public school with an academic record that earned her a scholarship to Pennsylvania State University.

“It’s crazy remembering what each traumatizing event felt like,” Anckle says. “Leaving Panama as a little kid was really traumatizing for me and then learning I was poor… and not finishing my senior year (at Catholic school). It was like the end of the world.” 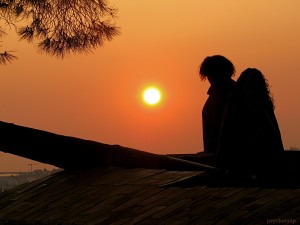 With every struggle she encountered, however, Anckle’s family was there to reassure her that she would get through it. “We’re very spiritual people and we’re very faithful to that spirituality,” Anckle notes. “As a woman in her thirties, I definitely believe that there is something greater than me and I believe in the strength of the universe,” Anckle adds. “If you believe in yourself and in what you are supposed to be doing, then the entire universe conspires to bring that to you.”

Anckle reiterates this view when reflecting upon her participation in “Habla Women” and the opportunity it has given her to speak about the Afro-Latina experience. “It’s funny because when I went to college, I always believed I was supposed to be a voice,” she says. “I felt a responsibility to tell the truth and to speak on behalf of people who were silenced.” As such, she studied broadcast journalism, but instead of becoming a reporter in Pennsylvania, she wound up moving to New York and working behind the scenes as a television producer, director, writer and voice-over artist. It was through her work that Anckle eventually met Alberto Ferreras, creator and director of the “Habla” series, who reached out to her personally and encouraged her to audition for “Habla Women.”

“Everything has influenced everything and all of these things have brought me to this point,” notes Anckle, whose appearance on “Habla Women” marks her television feature debut. “Right now, I feel honored and blessed to be the person who is getting to speak on behalf of women who nobody even knew existed. What a great, amazing honor that is. Again, the entire universe conspires. It comes together in a way that you would never have expected.”

Ever mindful of how the past shapes the present, Anckle is grateful she moved to Brooklyn a decade ago, as it was here that she found a true sense of belonging. “Brooklyn is the place where I feel I can be 100% me,” explains Anckle, who shares an apartment in Crown Heights with her sister. “It doesn’t matter what kind of craziness I wear, what kind of crazy hairdo I’ve got going on, what kind of crazy comes out of my mouth… I fit in here.” 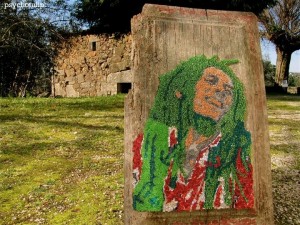 It has been here in Brooklyn that Anckle has explored the many aspects of her creative talents more fully, even focusing on visual art when she was laid off from her job as a writer at MTV in 2011. “I ended up being at home making weird little art projects,” she explains. This creative outlet led to a three-month stay at the ARTEterra art residency in Portugal and a solo show of her work that Anckle organized in Crown Heights upon her return. “There is just a cool, artistic, free and expressive environment in Brooklyn overall – and especially in Crown Heights, at least in my experience,” Anckle notes.

As Anckle continues to embrace her uniqueness and make her dreams a reality, she hopes she can serve as an example for the many young women who are struggling to do the same. “There are so many girls growing up with complexes,“ Anckle says. “I just want people to understand that you can be beautiful in your own right… and you should never feel that you are not good enough.”

“I am everything society says that someone like me could never be,” Anckle notes. “I am an Afro-Latina who has done and will continue to do things that defy expectations.”

“The little girl that walked in the tall grass is a ‘successful’ — for whatever that term means — artist in Brooklyn,” Anckle adds. “I’m sure there are so many people who had it so much harder than me, but I get to speak for us and that makes me very proud.”