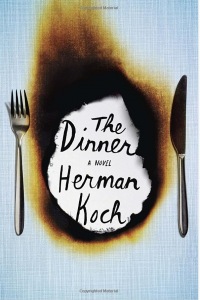 Do you think the Dutch have brought us only tulips, windmills and painters? (OK, and the tulip bubble.) I would have to add interesting modern novelists to that list, beginning with Harry Mulisch, whose novel “The Discovery of Heaven” is one of the most compelling books I’ve read. After reading “The Dinner” by Herman Koch I can conclude that Mulisch’s work is not a fluke.

As “The Dinner” opens, Paul and Claire are preparing for an evening out with Serge and Babette. It’s clear from the beginning that there is a history and a complex relationship between the two couples, as Paul has bridled at Serge’s initial suggestion that they meet for drinks nearby, rather than in the restaurant. Just what that history is, and how it bears on their past and present relationship, is slowly revealed during the course of the evening.

The restaurant’s dining room is the main stage, but the four central actors, depending on their states of mind, sometimes leave. We follow the rather unreliable narrator, Paul, into the men’s and women’s toilets (he’s in search of his wife) and then further, into the garden. In the course of the book Koch raises issues of loyalty and betrayal in the most challenging of circumstances: when is it right to protect a child from the consequences of his actions? All four of the main characters struggle with the choice, and their mental states fluctuate from calm to furious to distraught. Structuring such a story around an elaborate meal in a fashionable restaurant is an original choice. It works surprisingly well and the mysteries are unravelled and everyone’s true nature is revealed.

I read “The Dinner” in a hard copy and, unusually for a fiction book, one aspect of the volume’s design has stayed with me. The endpapers are a vivid red with just a hint of blue, and the pages are sized so that the endpapers outline the text. That red frame suffused my consciousness while I was reading and coming to grips with the story, underlining the eerie aspects. (I expect to come back to this theme as I continue to read books on an e-reader.) While “The Dinner” is an extremely well-written book and I definitely recommend reading it the issues Koch forces the reader to confront are visceral, and the book can be so painful to read that I could only do it in small bursts.

In her review of “The Dinner” in the New York Times Book Review, Claire Messud suggests that Americans won’t read a novel when they don’t like a character. I didn’t like Paul’s acts, and he’s increasingly revealed to be an unpleasant character. But even Paul had to face reality, and I found the way that Koch made him do so to be compelling. Do you agree? Let us know in the comments.

Tale of the Tweets: Marty Markowitz’s Final State of the Borough Address