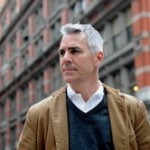 Brooklyn Heights’ writer & author John Kenney’s debut novel “Truth in Advertising” was released this week by A-list publisher Simon and Schuster. The book explores the fictional life of a modern day ad pro—after Kenney worked as a copywriter in NYC for 17 years and as a New Yorker magazine contributor since 1999.

It was reviewed in Tuesday’s Boston Globe (albeit not too kind)… In addition, The Brooklyn Daily Eagle, which published a Q&A with the writer today, notes: “Through his fictional character Finbar Dolan, Kenney offers a candid and humorous vision of what it truly means to be an advertising professional, delving not only into Dolan’s professional life, but also the inevitable complications of romance and family relationships.”

In the Eagle profile, the (very handsome) Kenney also shares some sweet smack about living in Brooklyn Heights:

It is nice to live not far from where Walt Whitman strolled. I moved to Brooklyn in 1998. I was living on the Upper West Side, in an apartment I couldn’t really afford. I came over to visit a friend one afternoon in Brooklyn Heights. I’d never been to Brooklyn. I found an apartment a few months later and have lived in the neighborhood ever since. My wife and I have two children and the apartment is getting noticeably smaller. Last spring we drove to the suburbs of New Jersey and Westchester. All lovely. But we came screaming back to Brooklyn each time. We love it.