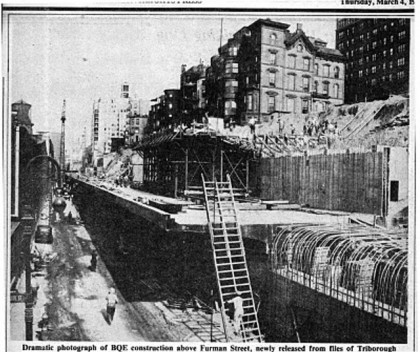 Most of us Brooklyn Heights denizens have seen dozens of pics of the Brooklyn Heights Promenade in its early days, but there are actually a couple here that were new to a guy who loves to scour the webbie for Heights history. How about you? Via Gothamist here.

Here’s the text that accompanies the Gothamist slideshow:

The idea of the Brooklyn Heights Promenade had been bounced around since Hezekiah Pierrepont proposed it in 1827 (decades later, in 1864, Abraham Lincoln declared, “There may be finer views than this in the world, but I don’t believe it.”). The idea didn’t happen in Pierrepont’s lifetime, but he “lived and died in the belief and desire, that the Heights some day be made a public promenade.” Over 100 years later, enter Robert Moses.

Moses originally proposed that the BQE go directly through Brooklyn Heights, but was talked down from this crazy idea by the powerful residents of the neighborhood. The idea for the design with the promenade on top was actually proposed by one such resident “whose private garden would be destroyed by the arterial highway”—he suggested that the BQE be two levels, and have a “cover” on top protecting the gardens from smog and noise. The “cover” became the promenade, and the space was dedicated on October 7th, 1950, when Moses announced: “I don’t know of anything quite like this in any city in the world.”