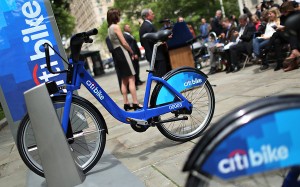 Mayor Bloomberg announced Friday that Bike Share will not begin rollout until Spring, again blaming it on a computer glitch. With typical high-tone snark, he said on his radio show, “The software doesn’t work. Duh. You’re not going to put it out until it does work.” The program was originally to launch in July.

According to The New York Times, the city released a timeline that will begin in March with 7,000 bikes at 420 stations, before eventually expanding to 10,000 bikes and 600 stations.

“New York City demands a world-class bike-share system, and we need to ensure that Citi Bike launches as flawlessly as New Yorkers expect on Day 1,” said transportation commissioner Janette Sadik-Khan. Bloomie added, “The people that are putting up the money understand. They’re probably not any happier about it than the people who want to rent the bikes or you and me or everybody else. But that’s the real world.”