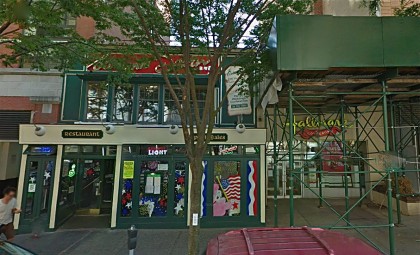 So we were apparently a little tardy in our weekend post about the closing of Montague Street’s Hallmark store. Let’s make good by sharing the latest on the building planned for 172-174 Montague, which will replace the two-story structure that once held Eammon’s and Hallmark.

First, the Brooklyn Eagle reveals that new owner “BH 1 CD LLC,” is operated by principals Eli Stoll and Charles Dayan. A little more digging by BHB shows that the company is based at 499 Seventh Avenue in Manhattan. As previously reported, the 8,150/sf building (and 5,000/sf lot) sold for $12 million. The current 50-foot wide and 95-feet deep structure—which also has a cellar—was originally constructed in 1925, and does not fall within the Brooklyn Heights Landmark District and thus is not subject to its 50 foot height limit. According to Property Shark, the building was most recently assessed at a value of $1,699,650.

With a C5-2/DB zoning designation, the property is approved for 60,000 buildable square feet and “significant air rights,” with a demolition permit already issued by the Department of Buildings, the Eagle says. Originally, an application was filed to construct a 19-story, 66-unit mixed-use residential building—but was nixed by DOB July 10.

Besen & Associates, which brokered the deal, says the seller Robar, LLC (a private investor) “resisted the temptation to sell his air rights on several occasions after receiving unsolicited offers,” according to David Davidson, who represented the seller with Besen’s Lynda Blumberg. That includes a bid from the developer of the 34-story Archstone luxury rental next door, at 180 Montague Street. It was built in 1999, and sold in 2006 to residential REIT Archstone Smith for $101 million.