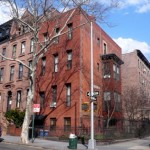 A four-story Brooklyn Heights townhouse at 265 Hicks Street (on the corner of Joralemon) is undergoing a renovation that will convert the eight-family property into two units. Brownstoner reports that the DOB permit calls for “exterior demolition and restoration of the existing brownstone,” which will include construction of a new front stoop, rear balcony, new roof and—ooh la la—a penthouse addition and new elevator.

The home was on the market in 2008—without interior photos—which would lead one to believe that the interior calls for a gut reno. Brownstoner : It was last asking $2.5 million, and sold in December 2011 (delivered vacant) for $2.2 million.