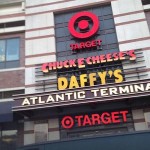 Clothing discounter Daffy’s, which has pervaded New York for 50+ years, is closing all of its stores, including the location in Downtown Brooklyn’s Atlantic Terminal, at Atlantic and Flatbush avenues. The Secaucus-based retailer announced Monday that its 19 metro-area stores will shutter over the next few months, as the company liquidates, according to Crain’s New York Business.

In a statement, Daffy’s said it “deeply regrets that this action was necessary due to the impact on its business of the uncertain economy and weak consumer spending and a lack of viable financial and business alternatives.” Other Daffy’s locations include Herald Square, SoHo, the Upper West Side and Times Square.