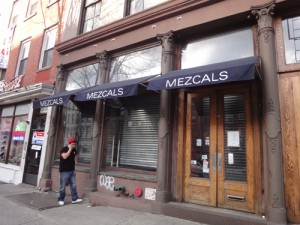 In The New York Times’ extensive Tuesday preview of new restaurants opening throughout New York City this fall, Italian eatery Red Gravy—coming to 151 Atlantic Avenue at Clinton (after what appears to be a year’s delay)—gets a thumbs up from writer “Florence Fabricant.” Regarding the menu: “Saul Bolton’s take on Italian gives a serious nod to the south of the boot (sardines with caponata, bucatini con le sarde, spaghetti with eggplant, ricotta and basil, porgy alla pugliese). Ben Daitz, a partner and designer, is creating an Italian farmhouse seen through a Brooklyn lens.”

Bolton also operates Brooklyn’s The Vanderbilt at 570 Vanderbilt Avenue in Prospects Heights; and Botanica, 220 Conover Street, in Red Hook. New York magazine, Gothamist and The Brooklyn Paper have also heralded the coming of Red Gravy—with previews as far back as a year ago. Boy, talk about generating buzz.

Brownstoner reported in February that a liquor license permit was posted on the door of what was formerly Mezcals in the location. Gravy is expected to start flowing in late October or early November. (Photo: Brownstoner)