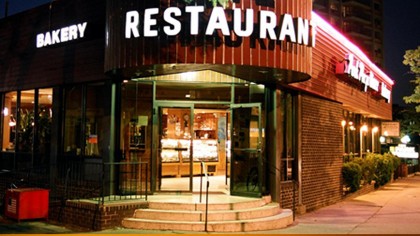 Following a fire August 4 that decimated the kitchen and HVAC system at Park Plaza Diner, the long-lived eatery at 220 Cadman Plaza West is scheduled to reopen for business Thursday, September 6. Dimitri Likourentzos, a member of the family-owned diner and its chef, tells BHB that the blaze caused extensive damage, requiring gutting of the kitchen, duct-work, AC units and a large portion of the roof.

“We had to practically rebuild the kitchen and fix a lot of the roof, which became a swimming pool after the Fire Department was here,” Likourentzos says. “It also destroyed a good bit of the renovation we had started a month before.” He muses: It’s been a lot of fun.”

Park Plaza will reopen Thursday, hopefully by midday. Likourentzos says, “We make so much of what we serve fresh, so there are a lot of day-to-day items we’re trying to get in stock before tomorrow. We’re hoping to be back in time for lunch.” Normal business hours at Park Plaza are Sunday-Thursday, 7 a.m. to 1:30 a.m., and 24 hours on weekends. (Photo: Park Plaza)