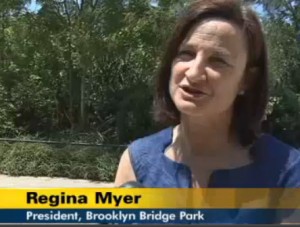 NY1 offers an upbeat 2-minute report on the progress of the 85-acre Brooklyn Bridge Park, which it says now attracts 60,000 visitors each weekend. Reporter Jeanine Ramirez offers: “Designs changed over the years. So did the oversight of the property. The Port Authority transferred it to a state entity called the Brooklyn Bridge Park Development Corporation. It was later transferred over to the city.”

Regina Myer, President of BBP, comments, “Mayor Bloomberg and Governor Paterson agreed that the city would take the project over because the state just didn’t have the money to put into the park and they realized the city would be a much better steward of the park site.”

Regarding the imminent controversial 200-room hotel and 159-unit residential building, Myer says they are necessary to raise funds to sustain the park: “The condominium [One Brooklyn Bridge] has been paying ground rent and payment in lieu of taxes since 2008 and all of the maintenance and security and upkeep is paid for by the funds we’ve received.” She insists the new multi-use development, which was approved in late June, “will be done with good taste.”