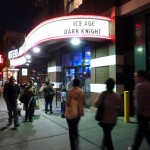 The UA Court Street Stadium 12 movie theater was packed all weekend, with about 20 showings a day of the “The Dark Knight Rises.” McBrooklyn cites Fandango, which shows that most screenings were either sold out or near capacity, despite the horrifying Aurora, Colorado, massacre that left 12 dead and 58 wounded during a midnight showing Friday. The movie also screened three times daily at Cobble Hill Cinemas, 265 Court Street.

Despite box office tallies being delayed until Monday, media outlets are reporting that the film took in $162 million in North America over the weekend. That sum gives “The Dark Knight Rises” the highest 2D opening in history.

Crain’s New York quotes theater-goer Katie Birkel, who saw the movie over the weekend in Manhattan. She said she had been inspired by a statement from the film’s director, Christopher Nolan, after the Colorado tragedy: “He said that movies are about coming together and sharing an experience. I agree with that.”

Mike Sumner, standing a few steps behind her, added, “Colorado was an isolated incident. I’m not afraid of copycats. Besides, I’m a New Yorker. We’re always vigilant.”