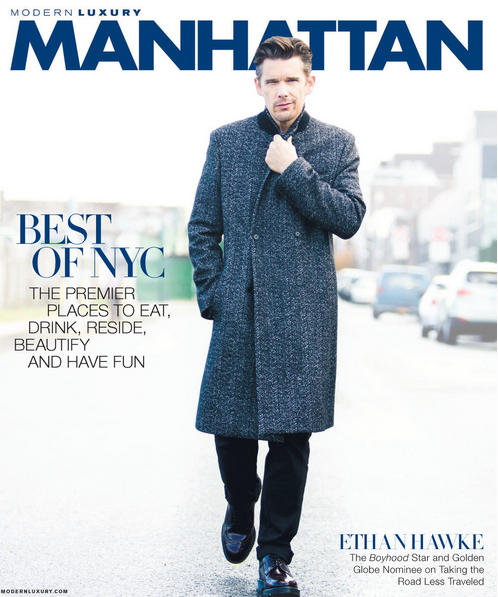 Actor/Brooklyn Heights (technically/really Boerum Hill but we’re on a roll) resident Ethan Hawke says that Brooklyn is what Manhattan used to be in a Manhattan Magazine profile.

Page Six quotes the actor as saying, “The whole city’s changing, while Brooklyn feels to me the way New York was a while ago.” (Oddly this quote is not included in Manhattan Magazine’s digital version of the story.)

Hawke stars in “Predestination”, the film adaptation of Robert Heinlein’s “-All You Zombies-”, opening January 9.

The actor also recently worked on the biopic about jazz legend Chet Baker called Born to be Blue. 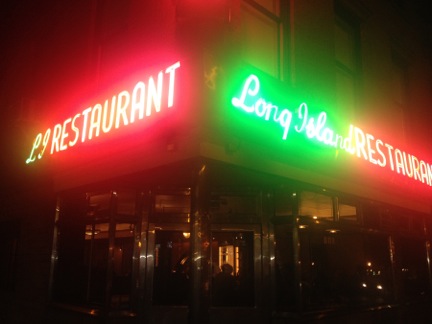 Long Island Bar and Restaurant owner Emma Montero Sullivan spoke with NYC Media’s Neighborhood Slice recently. She discusses how she came to own the bar, how she met her husband (both served as bartenders) and eventually why she made the decision to rent it out to Toby Cecchini, and partner Joel Tompkins who have kept the place true to its history.

The video below is well worth watching:

The owners of Last Exit Bar posted this dispatch on their Facebook page last night, announcing the bar would close at the end of the month:

It with with a very heavy heart that we are announcing that after 16 years Last Exit will be closing it’s doors at the end of April.

We can blame landlords and gentrification etc etc etc but all anyone really needs to know is this:

Once upon a time many years ago, three young people had a dream. We had no money but we knew how to have fun. We put our strengths together and created an amazing place. We have seen long lasting friendships formed, families created, and some crazy ass shit (I’m looking at you Last Exit bathrooms!). And best of all, we have TRULY been blessed to have had such incredible people working for us over the years that are absolutely considered family.

It has been quite the ride.

Thank you so much to everyone for taking this journey with us. We are incredibly lucky to have had this chance and opportunity to own our own business in NYC and we will never forget it. Last Exit is such a special place and the memories will last forever. Thankfully most of these memories took place before cell phones cameras.

The Vortex is peacing out. Hopefully we can make April all that it is meant to be. 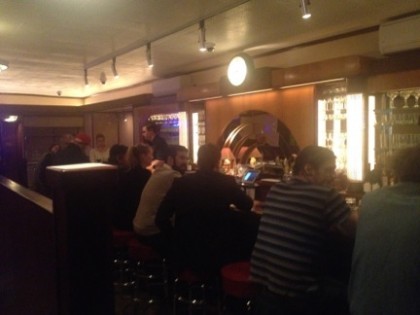 The long-shuttered Long Island Restaurant has begun a soft opening, and is serving drinks from Wednesday to Sunday. Much of the historic infrastructure has been retained, including the Art Deco bar fixtures (and the cigarette burned bar), the formica tables at the booths and a section of the original decades-old wallpaper.

Despite its history as a longshoreman’s watering hole, the Long Island’s offerings are distinctly upscale, including a range of precision-made cocktails, a $13 red wine and a $10 white(plans are in place to expand the wine offerings), and nothing as lowly as a PBR on the beer list.

Currently the kitchen is closed while the staff works the kinks out of the the bar operation, but the plan is eventually to offer “bar snacks” to complement the drink offerings. 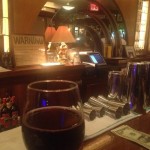 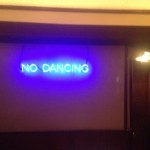 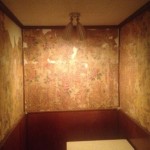 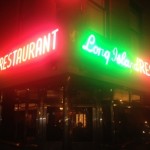 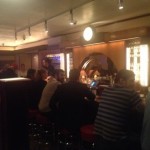 This just in from Jane Greengold – it’s the last year for Impaled Pumpkins at Kane and Strong. How can you be part of history? Read on:

For years, with the help of friends and family, I have impaled 100 pumpkins on the spikes of the iron fence on the corner of Kane and Strong in Cobble Hill for Halloween. Every pumpkin is unique. The impaled pumpkins are left for months, to age as nature commands, into gnarly remnants of themselves.

This will be my last version of Impalements at this location. Next year, it may appear at a new location.

Please join in for this final year, and help impale the most heads ever. Everyone can bring head. There are 274 spikes so there is room for a lot of participation.

choose the right size and kind of pumpkin – 4 ¾” – 5” inches in diameter, taller than it is

round, and soft enough to carve;

LEAVE THE TOP ON;

cut a 3/4” square hole in the middle of the bottom (for the spike);

remove the innards of the pumpkin through the facial features; and

Bring the carved pumpkin to the corner of Kane and Strong between 3 pm and 7 pm on October31, 2012. We will impale it!

According to the Brooklyn Daily Eagle:

Brooklyn Supreme Court Judge Carolyn E. Demarest on Thursday ordered SUNY Downstate to present a full accounting of all LICH property, assets and funds transferred to Downstate, the income derived from the properties, details about the other LICH properties SUNY plans to dispose of and more, no later than August 5.

The Eagle article says “LICH’s money trail is murky at best.” It notes that LICH’s previous owner, Continuum Health Partners, with which SUNY contracted to handle LICH’s billing after the hospital’s sale, has been accused by LICH physicians and staff of failing to bill for many services performed after the sale. Judge Demarest’s order also requires SUNY to account for $15 million it withdrew from a fund last year that was supposed to be used exclusively to pay for LICH’s costs of operation.

In a related development, the Daily News reports that retired New York Supreme Court judge, former state senator, and city councilman William Thompson Sr., father of mayoral hopeful William Thompson, has been appointed by Judge Johnny Lee Baynes to act as a “mediator” in the dispute between LICH doctors and nurses and SUNY over SUNY’s attempt to close LICH.

The more people who sign the petition, the more influence we can have. So don’t forget to share the petition with your friends. Sharing personal stories (on Facebook, your blog, etc.) about what Pacific Green means to you is also a great way to spread the word.

Thanks for doing everything you can to get the word out.

Foner first informed the neighborhood about the petition in a Cobble Hill Blog comment on June 9, the night his quest began. The next day we received a passionate and compelling email from him detailing why he’s getting involved — “[When} I heard the news and my heart sank,” he wrote.

The Brooklyn Eagle picked up the story yesterday –

Brooklyn Eagle: As of Monday morning, more than 700 Pacific Green supporters had signed a petition at Change.org imploring J Crew to put their store elsewhere.

“When I heard the news that J.Crew was moving to the corner of Pacific and Court where my beloved grocer now lives I was heartbroken,” writes Alexis Anselmi. “This cannot happen and I will do everything I can to stop it! Pacific Green is a staple in this neighborhood.”

Elizabeth Fountain wrote that she moved to Cobble Hill ten years ago for the “mom and pop feel.”

The Brooklyn Heights Association urges us all to write, call, or e-mail (or all three) Governor Cuomo asking his help to save Long Island College Hospital. While acknowledging that there are allegedly seven suitors possibly interested in buying LICH, nevertheless:

SUNY Downstate has failed to turn over the LICH financial records parties have requested. Moreover, SUNY Downstate has made representations about LICH finances that are simply not true. Without open books, potential suitors cannot evaluate LICH’s economic viability — and there is no assurance that the disposition of LICH will be a fair one. SUNY Downstate’s actions have revived fears that its real goal is to sell the land to a real estate developer.

The Pacific Green Gourmet Shop at 151 Court Street appears to be losing its lease according to a report from The Real Deal. Clothing giant J. Crew is rumored to be taking the space as the area around Court Street and Atlantic Avenue continues to evolve into a shopping destination. Trader Joe’s and Barney’s have opened outlet in the vicinity in the last couple of years and the trend does not seem to be slowing down.

The Real Deal: As part of the further transformation of retail shopping in Brooklyn, the global apparel chain J. Crew is coming to a two-story building in Cobble Hill, according to two people familiar with the transaction.
The retailer signed a 10-year net lease last week for the building at 151 Court Street on the corner of Pacific Street, though some details still need to be ironed out, one person familiar with the deal said. J. Crew would take 2,349 square feet each on the ground floor, lower level and second floor.
J. Crew is not the only national retailer to move into the neighborhood. Trader Joe’s on Court Street and Barney’s Co-op, a lower cost unit of the designer department store, on Atlantic Avenue, are also nearby tenants.
The asking rent for the space was approximately $520,000 annually for a triple net lease, one source said. 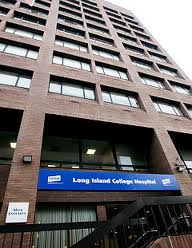