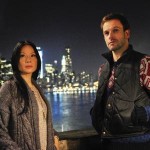 Buzz about the show is mounting, according to The New York Post, not only from advertisers, but from the geek squad at Comic-Con in San Diego, who were zealous after being shown a sneak peek last week.

The Rob Doherty series stars British actor Jonny Lee Miller “as the funny and eccentric Holmes who, in his capacity as consultant to the NYPD, can deduce all manner of things the rest of us wouldn’t think of to solve a murder. He does it all with panache, great wit and peculiar style,” the Post reports. Lucy Liu stars as Watson.

While Holmes supposedly lives in his father’s Brooklyn Heights brownstone, the pilot was filmed in Harlem, with interiors shot at a studio in Long Island City. Setting the show in New York seemed like a natural fit also because of the city’s similarities to London. “If you’re going to transplant Sherlock Holmes to an American city it has to be New York,” Doherty says. “There’s a texture to the place that’s reminiscent of London and both have Victorian elements.”