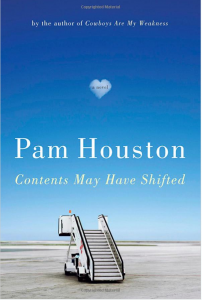 There are some women who are simply unlucky in love, and there are other women who always fall for the shoot-myself-in-the-foot-I-don’t care if he’s bad for me kind of love. Pam Houston’s novel “Contents May Have Shifted,” which follows the travels, and travails, of a woman named Pam, is about one of the latter.

Pam is getting over, sort of, her breakup with Ethan, who was also seeing several other women while involved with Pam. He lied to all of them, of course, including Pam. She knows it but, for a while, can’t seem to do anything about it. She visits spas with her women friends, and explores whether she can settle into a new relationship with Rick. Pam is also running from her experience with her father, who threw her so hard into a wardrobe when she was four that she broke her femur.

The novel explores travel, love and death – and Pam’s perpetual pursuit of the first in order both to avoid, and invite, the latter two. The novel is told in a series of 132 shards, organized around the many things that can, and do, go wrong on the flights Pam has taken. The structure, and the novel, are not standard, but they greatly repay the reader who sticks with them. In between fragments of Pam’s explorations of of the United States, Asia, and Central America, some other themes emerge. The fickleness of men, the steadiness of women – slowly the picture comes into focus.

Houston is an author in control of her craft. She musters facts about whales Melville never thought of. Pam comes across as sensible despite all her provocative issues with men, and while Pam explores what we refer to as New Age-y stuff her sardonic evaluation of it keeps everything in neat equipoise. Discussing a description of one of her friends, Quinn, as a “seventh-cycle sage” by someone versed in “something called the Michael teachings,” Houston says:

We don’t really know who Michael is or was, but we do know he said that before taking a body each lifetime, every essence determines for itself, perhaps carefully, perhaps not, the culture, sex, personality, and body type in which it will be housed. “Essences generally try to set themselves up in the vicinity of their entitymates,” Quinn reports, and then we have to take turns saying entitymate a whole lot of times out loud.

Over the course of the novel Pam’s searches are repaid with self-knowledge, and the reasoning behind the airplane organizing structure is revealed. I found myself completely compelled by this unusual book with its clean clear prose. It took me places – dog-sledding for one – I have never been. Do you agree? Let us know in the comments.

Contents May Have ShiftedPam Houston