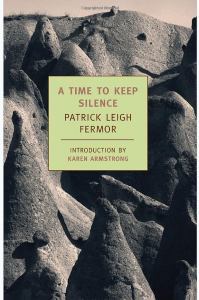 Patrick Leigh Fermor once had a book to finish and, the world too much with him, took himself off to the Benedictine Abbey of St. Wandrille de Fontanelle to complete it. And there he discovered, rather to his surprise, a quiet worldliness. It was a welcoming cloister, and one in which Leigh Fermor, who describes himself as a “giaour in their midst” felt accepted and indeed enlivened by the company of monks.

The Abbey itself reflects the vicissitudes of French religious and secular life. It was founded in 649 by Wandrille, a courtier, and the Abbey “grew and prospered” for two centuries, until “the wing- and horn-helmeted Normans arrived in narrow ships from Scandinavia and conquered and laid waste the whole of the region.” The monks wandered for many years, but then returned and rebuilt their abbey. It survived through the period of Commendation – a French practice of rewarding courtiers with abbeys for service to the state – all the way up to the French Revolution. Again the monks were scattered, but after a century or so they reconvened. The abbey was in the line of fire after the Normandy landings, but survived. “Sixty or seventy choir monks and lay-brothers–representatives, after exactly thirteen centuries, of a monastic brotherhood that nothing seems to be able to destroy–now inhabit, as if nothing had ever ruffled the quiet rhythm of their history, the ancient buildings . . .”

The monastic life is foreign to us (if you read “The Swerve” by Stephen Greenblatt, you’ll find a particularly scathing description of medieval monastic life), though Karen Armstrong, in her introduction, writes of theology as “a form of poetry, an attempt to express the inexpressible.” Leigh Fermor found it something of a relief, agreeing with the Abbott of St. Wandrille who remarked one day that the outside world abuses the power of speech. In fact, Leigh Fermor found visiting monasteries congenial enough to have explored several other cloistered communities, and the rest of the book describes those journeys.

The second stay was in a Cistercian abbey. Cistercians are a branch of Benedictines, but much stricter.

The programme of life in a Benedictine abbey had appeared at first forbidding; but compared with the Trappist horarium it is the mildest villeggiatura [holiday]. A Trappist monk rises at one or two in the morning according to the season. Seven hours of his day are spent in church, singing the offices, kneeling or standing in silent meditation, often in the dark. The remainder of the day passes in field-labour of the most primitive and exhausting kind; in mental prayer and in sermons and readings from the Martyrology. Leisure and recreation are unheard of . . .

Food is not a pleasure, and there is very little leisure to think or reflect. It’s an austere existence, spent in contemplation of death. What draws someone to it, and what keeps him there? It’s a riddle that Leigh Fermor ponders quite beautifully, but doesn’t attempt to solve, during his own meditations.

Leigh Fermor’s final site is the Turkish community of Urgüb in Cappadocia (tourist photos here) – carved out of rock, used for centuries, and then abandoned. He describes the abandoned monasteries as beautiful but not as sad as their Western fellows, perhaps because their long disuse has made the Eastern version of Christianity less familiar, perhaps because he can only imagine who must once have occupied them.

This short book is a gem; having almost accidentally delved into the cloister, Leigh Fermor discovers and recounts the pleasures he finds there with clarity and warmth. Do you agree? Let us know in the comments.

Have a book you want me to know about? Email me at asbowie@gmail.com. You can read my metrics blog at asbowie.blogspot.com.