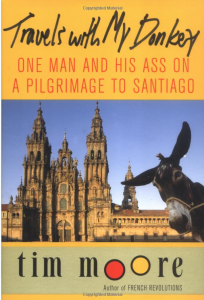 The reasons one may have for setting out on the lengthy pilgrimage to Santiago de Compostela, in northwest Spain, are various. For some, it’s a spiritual quest, for others, the opportunity for a reckoning after a divorce or breakup. For Tim Moore, it was, instead, more of an opportunity to take a “trip to the moral high ground.” Which meant an excuse for a very long holiday, with a lot of alcohol (“in the name of historical authenticity”) for not very much money. But walk he did, starting in St. Jean Pied de Port in Spain, and continuing the approximately 500 miles to Santiago. And that’s the trip Moore describes in “Travels with My Donkey: One Man and His Ass on a Pilgrimage to Santiago.”

Did I mention that Moore decided to travel with a donkey? He spends a whole chapter on this happy decision, weighing the benefits of not carrying a backpack against the responsibility for a large quadruped. The decision paid off, not least because it allows Moore to get the word “ass” into the subtitle of his book (in the UK edition which is called “Spanish Steps,” too). And then he uses every synonym for asinine he can find to describe both the donkey’s behavior and his own. Because there’s a lot of behavior that Moore finds first puzzling, then sort of endearing. And that’s when he’s describing his own response to the long trudge.

The Camino de Santiago was a pilgrimage route for many centuries, then more or less abandoned during the Enlightenment. It was rediscovered in the 1980s – you must know someone who has spent some time walking it, or at least talking about walking it. Moore has a good time relating tales of his fellow travelers, who come in different varieties and all shapes and sizes. Like Chaucer, Moore characterizes his fellow pilgrims, and they tell many trenchant stories in the evenings. And along with the Don Quixote references, there’s plenty of earthy humor here. Donkey humor, too.

And Shinto the donkey is quite deservedly a large part of this book. Taking care of him – finding pastures at night, feeding him, and alternately cursing and hugging Shinto, Moore discovers that he’s got some reserves of patience and resourcefulness. And celebrity – seeing Shinto walking along reminds ancient Spaniards of their rural youth, and the pilgrims who have only heard of him are on the lookout for a sighting. Moore’s wife and three children come along for a few days, and Moore is flabbergasted when his seven-year-old daughter is considerably more effective at moving Shinto along than he is.

The book has tiny lovely line drawings at the beginning of each chapter that both identify the portion of the route Moore describes and highlight some of the incidents Moore hilariously describes. “Travels with My Donkey” is never cloying, frequently funny and occasionally charming. I’ll give Moore the last word:

Was my life different now, or did I at least have any new ideas? Well, I had learnt to be more patient and less fastidious, to cope when many of the basic decencies of modern life were absent, to relish them when they weren’t. I had made sense of a complex world by appreciating the humble solidarities of the past; learnt the true value of water; acquired a Dark Ages lexicon of livestock feed and disease. I had learnt to accept, even befriend people I’d have previously dismissed . . .”

Those sound to me like some good lessons. Are you ready to go on a similar trek? Here’s a link to a video Moore posted about his decision to buy (use? follow?) a donkey. Have you been to Santiago de Compostela, by whatever means? Let us know in the comments.

Tim MooreTravels With My Donkey

Tracing the Transit System, 1940-1968 – an evening with Andrew Sparberg