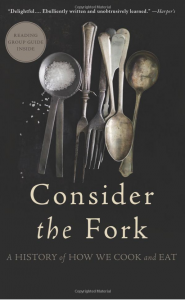 “Consider the Fork,” Bee Wilson’s entertaining, eminently readable history of kitchen technology, is an ode to the everyday, with some side excursions into the fantastic. Starting with the use of pots to cook in, a now-obvious solution that required centuries of human development, and moving through the technologies of knives, fire, measurement, grinding, conveying food to our mouths, and preserving, Wilson provides a fascinating look at what seems like a simple daily activity: cooking and eating.

Most of the cooking we do uses tools and techniques that have been around for millennia. We may understand the chemistry better, and the specialized room we cook in is a fairly recent development, but cooking itself is primeval.

However radical we may think we are in our everyday beliefs, when we step into a kitchen most of us become (small ‘c’) conservatives. We chop food with knives, stir it with spoons, and cook it in pots. As we stand in our modern kitchens, we still use the colanders, the pestles, and the frying pans of the ancients. We do not start from first principles every time we want to produce a meal but draw on the tools and ingredients we have at hand, governed by the rules and taboos and memories we all carry in our heads about cuisine.

Take the humble cooking pot, for example. It’s extremely useful, but not absolutely necessary. For many years before its invention people cooked directly on fires, with stones, and, where they existed, in hot springs. Wilson points out that New England clambakes and Hawaiian luaus still rely on hot stone cookery. Over thousands of years, the cooking pot has gone through many iterations. The earliest ones were made of clay. Pottery, Wilson says, “is deeply personal. Even now, we describe pots as having human characteristics” such as lips, mouths, shoulders, hips, bellies.

Cooking pots must be watertight and burn proof. Eventually, clay pots gave way to iron cauldrons, cauldrons to specialized pots and pans. A Victorian kitchen, at least one in an upper-class home, might have had several hundred pots: saucepans with one handle, stewpans with two, some with lids, others with rounded bottoms. And then there are the heating properties. Iron distributes heat well but is heavy and difficult to clean; copper is lighter but is toxic in quantities that can leach from cookware.

The book is loaded with interesting facts and observations. Dogs were once trained to walk in little wheels that turned cooking spits holding joints of meat over the fire (think hamster wheels). We think of Victorians as the source of over-boiled vegetables, but Wilson supplies two reasons why we can’t take Victorian cooking times at face value. Modern vegetables tend more tender than those of a century ago and so need less cooking. And if a cook was using a small specialized pot, as a Victorian cook would have been, well, it takes longer to cook vegetables in a small pot with just a tiny bit of water surrounding it. The Chinese cleaver and the Western cleaver have two entirely different functions – Western butchers use a cleaver to “hack through meat bones. The Chinese version, the tou, makes possible Chinese cooking – whose “great characteristic . . . was the intermingling of flavors through fine chopping.” The fine chopping also means, Wilson explains, why the Chinese developed chopsticks – they don’t need knives at the table.

“Consider the Fork,” though occasionally repetitive – and with at least one error that crept in as the book was translated into American English – is a charming exploration of how we came to cook the way we do. I highly recommend it. What’s your favorite odd cooking fact? Let us know in the comments.

Have a book you want me to know about? Email me at asbowie@gmail.com. I also blog at asbowie.blogspot.com.

Listen To Tell The Bartender Episode 19: To Be Young