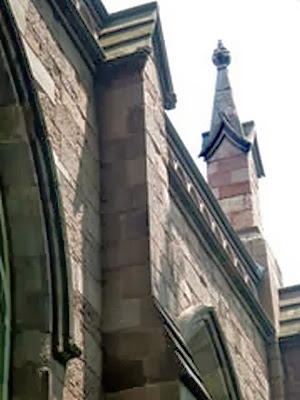 I damn near vandalized my briefs when I read the first sentence of Binky Philips’ Huff Po piece:

I first met Lou Reed at the Holiday Fundraiser Fair at Grace Church in Brooklyn Heights, the day after Thanksgiving, 1967.

Lou at the Grace Church Fair? My wife has been a stalwart Fair worker for maybe the last thirteen years or so. Of course, 1967 was well before our time here in the Heights. I was starting my first year of law school in Cambridge, Massachusetts and she was a sixth grader at a Catholic school in Lynn, a few miles away. Had we been introduced at the time, and told that we would someday be married, we would both have been very surprised, perhaps even (at least in her case) horrified. (I would probably have thought: “Well, she’s not the upper middle class WASP princess of my dreams, but she is pretty.” She might have thought: “What an pretentious, pseudo-intellectual twit.”)

Anyway, Lou was not present in person at the ’67 Fair. Mr. Philips, fourteen at the time, “met” him in the form of a stack of the first Velvet Underground LPs (you can always get some really good stuff at the Grace Church Fair; trust me), one of which he bought, took home, played, and didn’t like. He described Lou’s vocal delivery as “Bob Dylan with a Brooklyn hitter accent.” Two years later, stoned, and with a friend, he pulled the album out, played it, and SHA-ZAM! He was converted.

Later, Mr. Philips had several in person encounters with Lou, almost all of them in music stores. In one of these, he did manage a brief, inconsequential conversational exchange about a guitar. I was once (apart from the Detroit concert) in Lou’s presence. This was at a party, sometime around the ’70s-’80s cusp, in the then edgy (now touristy) Meat Packing District. My friend Charlie (not to be confused with Binky’s friend Charlie) pointed him out to me, standing maybe twenty feet away. I resisted the temptation to introduce myself, knowing I was not cool enough to merit his attention.

Mr. Philips writes that he was in the Grace Church Choir (by which he presumably means the Youth Choir) for three years. Among his choir mates at that time likely would have been Harry Chapin and Robert Lamm, later keyboardist, vocalist, and songwriter for Chicago.