Elvis was Jewish. That’s the emmes. 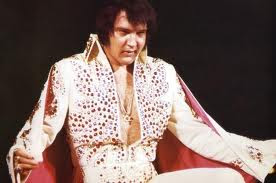 My old Lion’s Head drinking buddy Michael Simmons, often a helpful source of ideas for blog posts, sent me a message with the caption “The King of the Jews.”  In it, he asked, “Was Elvis a landsmann?” (roughly, the Yiddish equivalent of “homeboy”) and gave a link to an article in Tablet magazine, the server of which is now down, perhaps thanks to the folks in Unit 61398. Anyway, according to the article, Elvis was halakhically (i.e. according to Jewish law) a Jew by virtue of being descended from a Jewish great-great grandmother, Nancy Burdine, exclusively through the female line. The article also claims that Elvis’ mother, Gladys Love Presley, was aware and proud of her Jewish heritage. As a consequence, Elvis had a Star of David carved onto her gravestone.

Then there’s this video: a montage of still photos with a soundtrack, allegedly of Elvis singing Hava Nagila. Or is it really someone else?

By the way, emmes is the Yiddish word for truth. I learned this from my friend Gersh Kuntzman.
Addendum: Blogger Debbie Schlussel posted about Elvis’ Jewishness three years ago, assertng that:

He even did what people stereotypically claim Jews do:  Elvis got a nose job (for the record, no-one in my family [Schlussel is Jewish] has had this procedure).

She also quotes from a Jewish Weekly article that traces his descent from his great grandmother, the daughter of Nancy Burdine and Abner Tacket, “the Jewess Martha Tacket.” This made me recall an anecdote I read years ago about the late Democratic honcho and prominent lawyer Robert Strauss. When he was a student at the University of Texas, a fellow student remarked about a photo of Strauss’ fiancée, “What a pretty Jewess.” Strauss replied, “You sumbitch, she’s a pretty girl”