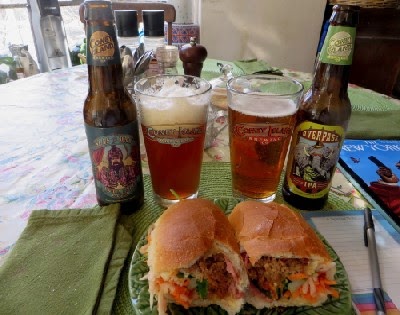 Coney Island Brewing Company recently released a new brew, Overpass IPA. Why “Overpass” and why the elephant on the label? The overpass in question is the Brooklyn side overpass of the Manhattan Bridge as it descends toward earth a ways inland, and the elephant is because the artists who years ago settled into lofts in the formerly industrial neighborhood beneath and around this overpass called it “DUMBO” for “Down Under the Manhattan Bridge Overpass.” Alas, those artists, other than those who became successful enough to pay ever increasing rents or to buy, have since been banished, as New York’s Bohemia is forced farther and farther afield by the inexorble workings of the real estate market.

Last year Coney Island Brewing released “Seas the Day India Pale Lager,” which I tasted and reviewed. Having gotten Overpass, their first India Pale Ale, I couldn’t resist sampling them side by side (see photo above). The first thing that struck me is that, contrary to my expectation, the lager (on the left) is a deeper amber color than the IPA. Please don’t conclude from the photo that the lager produces a much more ample head. Before I poured the brews, I accidentally knocked over the lager bottle, which made it very fizzy. The IPA produced a full, foamy head which had largely collapsed by the time that on the lager had declined to the point where I could finish pouring it. As I did when I reviewed Seas the Day, I paired both brews with a spicy Vietnamese bánh mì sandwich from Hanco’s.

Before this tasting, I tried the Overpass IPA by itself. My notes were: aroma–hops predominate, with floral undertones; flavor: hop bitterness dominant throughout. When I gave my wife a sip, though, her reaction was “Malty!” As the ale warmed in the glass, I got more malt flavor.

For this tasting I let both brews sit on the table for a while so that, when I poured, they were not too far below room temperature. This time I noticed malt flavor at the start in both brews, although the hop bitterness seemed more pronounced at the finish in the lager than in the ale. As it got warmer, the IPA seemed almost toasty. But as I ate the spicy sandwich, I noticed the hop flavor in the ale becoming more pronounced again. The principal difference between the IPA and the IPL was that the latter had more pronounced fruit overtones. This seems odd given that the hop mixture in the IPA includes two varieties–Centennial and Nelson-Sauvin, that are not used in the lager and are said to impart fruit flavors.

I find the Overpass IPA a fine, well crafted example of the style; one that, if not served too chilled, has excellent hop-malt balance. Of the two, I think the Seas the Day IPL is more interesting; but why wouldn’t an unusual brew like an India Pale Lager be so?

Coney Island Brewing has also recently released a 1609 Amber Ale, 1609 being the year Europeans first set foot on what is now Coney Island. I have a bottle, and will be reviewing it soon.