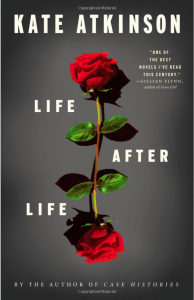 You are born, you live your life, you die. The universe appears to be ordered. As Albert Einstein once said, “the only reason for time is so that everything doesn’t happen at once.” For Ursula Todd, the central character of Kate Atkinson’s absorbing “Life After Life,” things operate a little differently. Ursula, the daughter of the warm but distant Hugh, a banker, and his sardonic wife, Sylvie, dies at birth. At least she does in one version of her story. But in the next and the next and the next she doesn’t, living a little longer each time. Atkinson uses her novel to explore the elements of chance in each life, the consequences each inconsequential choice, or the weather, or the haphazard explosion of a bomb might have on the lives of those around us.

Ursula is born in 1910. Her father is young enough to fight in the Great War; her younger brothers are old enough to fight in the Second World War. In most of her lives Ursula stays unmarried, though she has several lovers. In one life she is raped and undergoes an illegal abortion. She marries in two of her lives, once to an abuser, once to a German – and she adopts German citizenship. In several of her lives, Ursula studies in Germany in the 1930s, befriending a younger German woman named Eva Braun. That relationship gets her close enough to Hitler to point a gun at him in 1930.

Atkinson provides enough structure and chapter headings to allow the reader to make sense of things. That’s harder for Ursula, for whom time moves in a circle, because she is aware of other possible outcomes. She feels a fear, a darkening, a memory. Sometimes she is Cassandra-like, and her mother in particular is wary of her. Is it any wonder that Ursula tends to the detached, especially in her relationships with men? Her closest relationships are with family members. Ursula’s aunt, Isobel, provides an example of liberated behavior combined with deep consideration (it is Isobel who arranges the abortion). Ursula’s older sister, Pamela, settles into a conventional life of marriage and children despite an acute intelligence. And Ursula’s younger brother, Teddy, is the light of her, and several others’, lives.

The book is not confusing, and Atkinson enriches each version of Ursula’s life with added detail. The reader is in essence in the same position as Ursula: we know that in one, or several, versions, that Teddy will not survive the Second World War. Yet in each version we uncover things we did not know. Did Isobel run away with a lover? Give birth to a son? Give him up for adoption? Let Sylvie raise him? In a remarkable achievement, Ursula’s uncertainty, as well as her knowledge, become the reader’s. “Life After Life” may not be for every reader, but if you enjoy ambiguity then read this book. (It would be good for a cross-country plane ride.) You’ll be thinking about it for a long time afterwards.

What do you think happened in that cafe in 1930? Let us know in the comments.