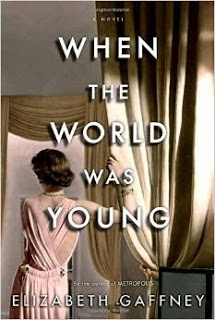 When I was in Mrs. Blalock’s 12th grade English class at Robinson High School in Tampa, I was required to give a book report every six weeks. Mrs. Blalock said students must begin each report by saying why they had read the book. With a tip of the hat to my still loved though long deceased teacher, I’ll begin this with a disclosure: I read this novel in part because the author is the daughter of a friend, neighbor, and fellow Grace Church parishioner. “In part” because another reason for my reading it is that it’s set in the neighborhood I’ve called home for the last almost 32 years, Brooklyn Heights, though at a time long before I came here; indeed partly before I was born.

The story begins on VJ Day, August 14, 1945 (this is the date Japan’s unconditional surrender was announced in the U.S.; Japan did not sign surrender documents until September 3, which is now the official VJ Day). Wally Baker and her mother, Stella Wallace Baker (Wally’s full name is Beatrice Wallace Baker) go out into the pandemonium filling even the streets of staid Brooklyn Heights. Stella is taking Wally to the nearby house of Stella’s parents, Waldo and Gigi, who are both physicians, as is Stella. As the day progresses, we are introduced to Waldo’s and Gigi’s housekeeper, Loretta Walker, an African American woman who also serves as Wally’s caretaker, and to Wally’s closest friend, Ham, who is Loretta’s son. We are also, in conversation, made aware of William Niederman, a PhD in mathematics and the college roommate of Stella’s husband and Wally’s father, Rudy, who, at Rudy’s urging by telegram from the South Pacific, becomes a boarder in the spare bedroom of Stella’s and Wally’s apartment “for the duration.” The duration is now over, and Rudy will be coming home to his wife and daughter,

As VJ day draws to a close, Loretta and Wally arrive at Stella’s apartment a little later than planned; there they find Stella dead on the kitchen floor, a suicide.

From this beginning, the story takes us from Wally’s girlhood to young womanhood and, at the close, motherhood. It is a bildungsroman, or novel of growth, but also a todtsroman. It is punctuated by deaths–Stella’s, as well as the death of her first love and fiancé, who is killed by a log falling from a truck as they travel to his parents’ summer house, which sets the stage for Stella’s later, at first reluctant, marriage to Rudy; of Wally’s younger brother Georgie, who succumbs to whooping cough because no penicillin is available, it having been sent overseas for the troops; of Waldo and Gigi; and of an ant queen. It is also shadowed by the fear of death–of Rudy’s, when he is with the Navy in the South Pacific, and of Ham’s, when he enlists in the Army and is sent to Korea. At its close, though, it is a novel of life. Its ending, like that of Peter Wheelwright’s As It Is On Earth, brought to my mind the final sentence of Vonnegut’s God Bless You, Mr. Rosewater: “Be fruitful and multiply.”

Life, both natural, in the form of ants, and imaginary, in the guise of Wonder Woman, pervades the narrative of Wally’s growth and maturation. Ham becomes interested in the ant colonies he found in Waldo’s and Gigi’s back yard, and collects some to form a captive colony inside a fish tank. He communicates his enthusiasm to Wally, who does the same. Gigi takes them to the Museum of Natural History and introduces them to Vernon Somersby, an entomology curator. Somersby is impressed and offers them regular tutelage. He gets Wally onto a team of researchers who are studying how ants communicate, and she makes an important discovery.

Communication, or the lack of it, is the major theme of the novel. Wally regards Stella, who is reticent about her life away from Wally, as a mystery. Bill Niederman is a mysterious figure, engaged in secret war work. A failure of communication between him and Stella, once rectified, sets the action going. Ham is infuriated by Loretta’s late disclosure of his true parentage. Wally is grateful for RADAR (always in all caps), a form of communication of which the initial recipient is unaware but which reveals the recipient’s location to the sender, for keeping her father alive in the war. There’s even a discussion, by Bill Niederman after he returns to teaching math at Rutgers, of the “Traveling Salesman Problem,” which has to do with establishing the most efficient routes of travel or communication.

Wally is a fan of Wonder Woman, perhaps in part because she wonders about her mother, who is something of a wonder. Some time before Stella’s death, when her mother is away, Wally goes into her bedroom and finds, in a box under the bed, “the most remarkable costume [she] had ever seen.” There is a blue sequined cape on which were “long silver triangles plunging from shoulder to hem, like daggers.” Its lining is “electric-blue silk with blood red piping.” Under it is

a matching dress, short with a sequined bodice and more of those spangly silver daggers on a blue field. Under the dress lay a blue and silver headband and a pair of silver high-heeled booties. It was the costume Wally would have conceived for her mother, if her mother was a superhero.

What clinches it is that Wally sees, embroidered in the lining of the cape, Stella’s maiden initials: “S.W.” Wally takes this to mean “Silver Wonder.”

Worlds opened up in Wally’s mind like accordion folds. Long-standing conundrums sorted themselves out…. All those days and nights she was away, too busy for Wally–she’d been striving to make the world safe for her daughter. And the sense of withholding that Wally had sometimes felt, the sense that her mother was keeping something from her, all that made sense now, too….She was Stella Wallace Baker by the light of day, and the Silver Wonder, a shining streak of justice, by night.

My fellow Brooklyn Heights residents will find some interesting history here. Jim Crow was not absent from our neighborhood, as we see when Wally and Ham go to swim in the St. George Hotel’s Olympic size poll, and the woman at the entrance directs Ham to the “colored changing area.” Ham endures a severe beating when he and Wally go down to the still active docks below the Heights and a longshoreman takes offense at his being there with a white girl. Finally, we get to see what it was like for those living on Columbia Heights–including Waldo and Gigi–when Robert Moses’ “Brooklyn and Queens Connecting Highway” (now the BQE) takes away a large chunk of their back yards.

When the World Was Young is published by Random House, New York (2014).

The Struggle Bus Episode 11: Taking a Therapy Hiatus as Self-Care and Hell is (Almost All) Other People For One Reason Or Another