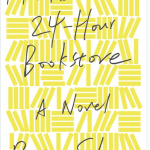 It’s been a while since I read a good quest story. When information is available instantly in the comfort of one’s home, there’s less reason to travel to find it. Clay Jannon, the protagonist of Robin Sloan’s charming new novel “Mr. Penumbra’s 24-Hour Bookstore,” mostly searches by computer. In this book, the travel is by plane and automobile. The magic comes from the imagination.

Recently unemployed after the startup he worked for failed, Clay stumbles into a job as the night clerk at Mr. Penumbra’s bookstore. Yes, it is open 24 hours a day. Once Clay is left alone to explore the bookstore, he finds that it is not quite what it appeared at first. There are shelves of books for sale, but then there are other shelves – Mr. Penumbra also operates a private lending library, one that is organized in an esoteric way. In addition to fetching books down from the shelves, Clay’s responsibilities include keeping a log of the members, the books they take out, and their appearance.

The job leaves Clay with quite a bit of time on his hands, so he disobeys instructions and starts poking about in the stacks. He programs a 3-D model of the bookstore, and uses Google’s new hyper-local shopping service to advertise the store. That ad brings in Kat Potente, a Googler – which means she is a very smart programmer. She smart enough, in fact, to fix a line of code in Clay’s model, and become intrigued with the bookstore herself. Together, they identify what all the borrowers have been seeking. That in turn sends Mr. Penumbra off to New York on shadowy business, and Clay and Kat follow.

As Clay likes to point out, it’s the perfect team for a quest. There’s the old wizard (Penumbra), the young one, Kat, and the rogue – that’s Clay himself. For a warrior, Clay draws on his best friend since sixth grade Neel Shah, now a budding entrepreneur. Together the four of them use brain power and computing power to track down the mystery. They don’t face down dragons, but there are some pretty powerful and shadowy forces they come to grips with. Mr. Sloan resolves it all nicely, with a few geeky, and many more literary, touches.

It’s very much to Mr. Sloan’s credit that he makes the computer programming and the archival activities of his characters transparent and comprehensible. “Mr Penumbra’s 24-Hour Bookstore” is a lively and complex book, full of allusions both classical and modern. Perhaps it also shows that, parental concern notwithstanding, a youth spent playing video games might in fact be good preparation for something. Do you agree? Let us know in the comments.

Tell the Bartender Episode 22: On The Road