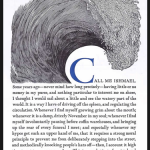 Call me benighted. Not in my secondary schooling, at a New England prep school that had recently gone co-ed, or in college, nor in any of the several years that have passed since I graduated, did I ever read, or even try to read “Moby-Dick.” True, in the bitter cold and long dark New England nights we did read “Billy Budd,” and that annoying story, whose bombastic lesson is only underlined by Benjamin Britten’s opera, made me decide never to read “Moby-Dick.”

That was a mistake. “Moby-Dick” is a terrific and engaging story; most notably, it’s surprisingly funny. It’s also fiercely dramatic. In case you don’t know, here’s a synopsis: Captain Ahab outfits a whaler in Nantucket to go in search of Moby-Dick, the great white whale who has defeated every attempt to kill him (and caused Ahab to lose a leg). Ishmael signs on as a crew member, and narrates the story of the voyage south from Nantucket, around Cape Horn, and into the Pacific Ocean in search of whales. Along the way there are diversions into types of whales, the histories of the various crew members, life on board ship, and storms and adventures.

Though there are spots of ennui, there is some pretty exciting writing. Here’s an example:

A short rushing sound leaped out of the boat; it was the darted iron of Queequeg. Then all in one welded commotion came an invisible push from astern, while forward the boat seemed striking on a ledge; the sail collapsed and exploded; a gush of scalding vapor shot up near by; something rolled and tumbled like an earthquake beneath us. The whole crew were half suffocated as they were tossed helter-skelter into the white curdling cream of the squall. Squall, whale, and harpoon had all blended together; and the whale, merely grazed by the iron, escaped.

You are there, in that small boat, chasing a whale with a storm coming up.

Despite the distance in time and space, the book has all sorts of resonance for the 21st century reader. It helps, perhaps, to have visited the New Bedford Whaling Museum, which has displays of whale boats and ledgers full of signatures and marks the whalemen made as they signed on as crew. The Seamen’s Bethel helps you picture the Whaleman’s Chapel Melville describes in Chapter 7. Nantucket and its harbor have probably changed since Melville’s time, but then Melville didn’t get there until after he’d written “Moby-Dick.” The reader who has been on a whale watch will also recognize many behaviors Melville describes, spouting of course, breaching, pectoral slaps and bubble feeding.

So yes, it’s a classic, it’s part of the canon. Let all that go (though Internet access helps because there are a lot of allusions, references, and descriptions of things most of us don’t come across every day) and enjoy yourself. Let us know your thoughts in the comments.