First of all, let me state that I love that Derek Jeter Gatorade Commercial.

I am perfectly happy to disregard the fact that it’s selling something, because it reminds me that what is really important about Derek Jeter is what he means to the fans, what he means to the people of New York, what he means to the everyday Yankee fan of every age, class, and race. The artful black and white images of the honest joy of the fans and seemingly honest humility of The Captain make us forget that the commercial is made by billionaires, starring a millionaire, to sell us quadrillions of something we probably don’t need. I can overlook the omniscient shadow of Cloud Mammon because the damn thing is so well made and so on point; I can easily discount these corrupt motives because it is a pitch-perfect representation of what a superstar means to his fans, and an extraordinary model, no matter how unrealistic, of how a superstar should interact with his fans. Seriously, the damn thing could be selling Mark Chapman Brand Tampons and it wouldn’t make a difference. The commercial is so good that I can regard the, uh, benefactor – that is Gatorade – as merely the modern versions of the Medici Family, making great art possible.

However, it still does not quite make me forget the following:

Let’s say some gamblers offer the manager of a Major League team, oh, a hundred thousand dollars to put an inferior player in the line-up in the hope that it will affect the outcome of that day’s game. Even better, what if these same gamblers get to the manager before the season begins and say to him “Hey…we will give you, oh, FIVE MILLION if you play this guy all season…yeah, I know you’re gonna want to bench him some days, and shit, he may even have rather stunning O-fer streaks that make you want to send him down to Triple A, but no matter what, keep this guy in the line-up.” In fact, my fictional mobsters might even go so far to say “We have already cut a deal with your boss, and if you even think of benching this guy, you will lose your job.”

Now…HOW is THAT any different from a team making MILLIONS UPON MILLIONS UPON MILLIONS of dollars in marketing, merch sales, ticket sales, TV deals, media deals, etcetera, by making sure that an inferior player plays every day, even if it has the real potential to affect the on-field quality of that team and possibly alter the teams’ chances of making the post-season, QUESTION MARK.

Jeff Buckley probably could have contributed more to the Yankees’ line-up in the second half of the 2014 season than Derek Jeter. But the option of benching Jeter was considered unthinkable. This means two things: 1) Someone (and there are a lot of “someones” here, from the Yankees to MLB to Jeter’s sponsors to the clubs in other MLB cities whose TV and live-gate numbers would have been significantly impaired by a Jeter non-appearance) made a lot of money by keeping Jeter in the line-up, so much money that the idea of benching him for the sake of fielding a better performing ball-club was unthinkable; and 2) The Warm’n’Fuzzy side of baseball has more meaning, at this point, than the actual nuts’n’bolts of the games (and I sincerely hope I will never use two ‘n’ contractions in a single sentence again).

Both of the above options are probably true, and when push comes to shove, I find the latter more offensive. See, money is money and money always talks, but in the long run, honesty does stand a chance against money. 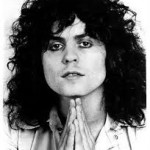 Marc Bolan, one of the many dead people who probably could have made more of a positive on-field contribution to the Yankees season than Derek Jeter did.

But competitive honesty does not stand a chance against nostalgia, no matter how well-intended that emotion is. We are all guilty. We all wanted to cheer the brave and kind captain, and our desire to engage in this kind of sepia-colored bonhomie, framed against the same low and wide Bronx sky that saw Brave Lou say his farewell, considerably outweighed our desire to see competitive baseball; we all decided to look the other way when the Yankees decided that sentiment was more important than a pennant.

And the Yankee brass knew this (and most definitely the MLB brass, too), knew of our desire, hell, OUR NEED, to bask in the glow of pinstripe-branded sweet melancholia, when they decided that they would sacrifice competitive baseball in exchange for the BILLIONS they would make by whoring out Jeter and the Yankee legacy. In a sense, this is as bad as any game-throwing scandal in the history of baseball – I mean, a whole season was compromised — except we were willing and happy participants who all agreed to look the other way, who all agreed that nostalgia and a season spent happily basking in the land of warm’n’fuzzy was more important that legitimate competition.

And any sport that favors nostalgia over competition is already halfway dead.