Derwood Andrews, and the sound of a post-punk, post-blues Catcus Acid Milkshake

Let’s put it this way:  If TONE POET, VOL. II was a new album by Beck, it would almost certainly be a serious contender for the Grammy for Album of the Year; if it was by, say, Bob Dylan, it would be the certain winner.  If Tone Poet, Vol. II was a new soundtrack to a Coen Brothers film curated by T Bone Burnett, it would be a much-talked about evocation of 21stCentury Blues; and if it was a new release by, oh, Mark Lannegan, post-grungers all over this great land would be getting stoned and telling their friends it was the best album of the year. 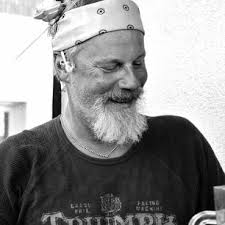 But Tone Poet, Vol. II is the extraordinary new album by a relatively little know artist named Derwood Andrews.  This deeply sensuous and luscious exploration of ambient blues and Americana is rootsy, meditative, and utterly magical to listen to; if you have ever pressed your ear against an acoustic guitar and just heard it ringing, if you’ve ever just wanted to live within the sound of an open tuned steel guitar, if you ever wanted to hear the sound of Clarksdale meeting the sound of Joshua Tree (with a very, very heavy dose of surround-sound hydrophonic/acidphonics), you will love this album. Tone Poet, Vol. II is an album for people who love the SOUND of the guitar, by which I mean the deep, rich, natural ambience and harmonic of a beautiful, open-tuned instrument; it’s also an amazing exploration into old American forms, made dreamlike yet tactile, new, and resonant to the heart.

Derwood Andrews is an English ex-pat living in the California desert, and he exists in that strange, sometimes frustrating netherworld between cult artist, undeserved obscurity, and intentional mystery.  I will admit that I know a lot about his work between 1977 and 1981, and relatively little about what he’s done since then.  However, what he recorded between ’77 and ’81 contains great power and magic, so I’ll devote a few words to it:

Bob Derwood Andrews was the guitarist for Generation X, and plays on their first two (essential) albums (their self-titled debut and the sensational, deep, and much overlooked Valley of the Dolls).  After leaving the band in 1980, Andrews and Generation X drummer Mark Laff went on to form the band Empire and record one truly remarkable record.  That album, Expensive Sound, is very goddamn close to being a classic, and Empire may be one of the best “single album” bands of all time (i.e., bands that only lasted long enough to make one album — I generally rate Empire right up there with Young Marble Giants and the Rich Kids). Expensive Sound is a deeply personal take on punk, turning the shout of punk into an intimate bedroom murmur; it presents a series of deep confessions over hushed riffs and loaded spaces, and it is like no other album of it’s time.  On one hand, it summons the bittersweet sepia whispers of the Go Betweens or Big Star, on the other hand it anticipates the highly personal riff, rip, and confess style of Nirvana (it is highly speculated that Kurt Cobain was greatly influenced by Empire).

Additionally, around the same time, Andrews helped make another extraordinary album.  In 1980, Andrews and Laff collaborated with Sham 69’s Jimmy Pursey to record Pursey’s first solo album, the sadly overlooked and rather wonderful Imagination Camouflage.  Solid yet artistic, Imagination Camouflage album combines the bite of Valley of the Dolls with the sandy, sad depth of Expensive Sound, but with a bit of PiL and Peter Gabriel hanging over the proceedings.  I have long advocated that Valley of the Dolls, Expensive Sound, and Imagination Camouflage need to be viewed as a rare and extraordinary trilogy, the sound of Andrews and Laff trying to wrestle a new kind of artistry out of punk that blends classic ‘70s britrock dynamics with a deeply emotional mindset that anticipated both Grunge and Emo.  Fucking remarkable work, and this “lost” trilogy really deserves its’ own column (maybe at another time, when I am not so distracted by the continuing horror of those ads for Sting’s Lost Sailboat or Trouble Down At The Mill or whatever the fuck that atrocity is called).  But anyway…

I sadly didn’t keep track of what Derwood Andrews did after the early-ish ‘80s, other than I knew he moved to the Southwest, and he played a one-off reunion gig with Generation X in London in 1993.  I am quite damn sure that there was a lot of wonderful work that I missed, but I am catching up with the story again in 2014, with the amazing Tone Poet, Vol. II.

Deeply modern, deeply old, this is a motherfucker resonator of an album.  Tone Poet, Vol. II is full of songs that are so lightly but perfectly sketched they feel almost as if Andrews just transcribed them out of the desert air; this is complimented by a Lanois-esqe attention to depth of sound that is absolutely mega-sensuous, like a cactus milkshake poured slowly over a crossroads where the devil and the hi-def meet.  The landscape is completed by a frisson of ultra-simple synths effectively swooping in every now and then and occasionally goosing the rhythm.  Unlike the more tightly-wound, Beck-esque Tone Poet, Vol. I, Vol. II is pure Ry Cooder-in-a-planetarium National Guitar opium blues; in fact, if you ever wished that Ry Cooder, Chris Whitley, and Daniel Lanois made an album together while chewing on about a dozen Benadryl, then this is the album for you (and you can listen to excerpts and/or buy Tone Poet, Vol. II here).

Like Scott Walker and Sunn O))) in their Everest-high and Marianas Trench-low Soused album, Andrews is finding an effective new vocabulary for traditional American melodies and musical/lyrical topics; the slow, sighing, echoing, whisper-in-the-ear blues of Andrews recalls scratchy old 78s, sassy medicine show whistles, lonesome yodelers and lonely twelve-bar bar bands, but it sounds naked, rich, and fresh.  More than anything else, Tone Poet, Vol. II is just gorgeous to listen to, and wraps around you like a thick, slightly scratchy, sleepy blanket.

I’ll add one more thing.  Very recently, Billy Idol told me that he would happily reunite with Generation X.  Whereas I am not advocating that (as much as I’d like to see it), it would be fascinating to hear Idol, a vastly underrated and sensitive melodicist and lyricist, bring his penchant for big-screen prom-night pop into the mushroom-laced abandoned drive-in in the desert world of Derwood Andrews. Both artists are exponents of different caricatures of the American Musical Dream, and it would be very interesting to hear what they would make together.