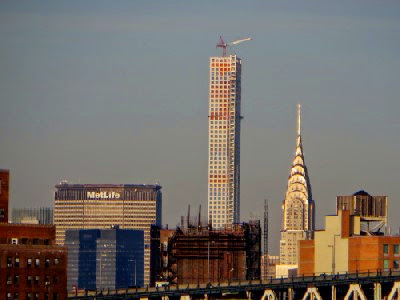 432 Park Avenue (center in the photo above) claims the title of tallest residential building in the Western Hemisphere, and second tallest building (after the new One World Trade Center) in New York City, but if measured by roof height the tallest. It’s described by its architect, Rafael Viñoly, as designed around “the purest geometric form: the square.” Not only is the building’s horizontal cross section a square, but all the windows are squares.  It dominates the midtown skyline with the grace of a colossal headless Pez dispenser, or upraised middle finger (the photo above was taken from Pier 1, Brooklyn Bridge Park). Aaron Betsky admires its “relentlessness”; I demur. Betsky also celebrates how 432 Park “represents the transformation of this and every other city into a place for the wealthy to live and play” as if driving out struggling artists and other relatively impecunious but creative people, and the inexpensive infrastructure that supports them, constitutes progress.

With bad luck, we may be subjected to more Viñoly designs, like 125 Greenwich Street, all of which will end up being pieds a terre for billionaires, with perhaps a few lower floor, smaller apartments going to mere multi-millionaires.

Viñoly discusses his design philosophy in this video. He plays piano well.

The developers of 432 Park are CIM Group and Macklowe Properties. Harry Macklowe is a developer whose company was once fined two million dollars for reckless endangerment resulting from the rapid night-time demolition of two buildings. Macklowe compares 432 Park to the Mona Lisa.

A Visit from St. Grohl