Somewhere in the sun-dulled suburbs clinging to Memphis, bleached yellow by the low, bright winter light and dotted by Super 8 signs on alien legs and baby-shit colored buildings labeled Dental Plaza, lies one of the Rosetta Stones of rock’n’roll.

There are many of these stele all over the Western World, some half-buried, some fully revealed, some forever lost; they can be found in the bricked up doorways of alleys in East Hollywood, in Hamburg cellars long-ago wiped clean of piss and beer, in New Orleans shotgun shacks where the Gods themselves were treated for cruel Gleet.

This particular stone, our Memphis Stone, has sat in plain sight for 60 years.  It is not so much that the words are unreadable as there are those who refuse to read them; some would say they are heresy, they not only defile the legend of the Poor Truck Driver but they also insult his fans.

The message, so obvious that it has defied revelation, reads like this: 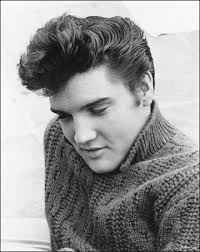 In the 60 years (!) since Elvis debuted, we have become so used to the idea that pop stars are pouting man-girls that sexual ambiguity and the idea of rock has become synonymous.  Think of the Rolling Stones’ Lips logo, think of teen doe McCartney, think of all those narrow, serpentine singers pregnant with licked-pussy lips and lissome hips, think of rough-trade aping Jim Morrison virtually begging for a man-fuck, think of Botticellian Bolan or Stipe (and that’s before we ever address the more deliberately ambi-sexualists like Bowie, Dee Snider, power bottom Rob Halford, or Marilyn Manson).

We are so used to all this that it’s a bit hard to believe that the concept once didn’t exist.  Pre-Elvis singers might be handsome, but nobody outside of the eccentricities of vaudeville displayed femininity, or looked pretty and hard. Caucasian male vocalists, band leaders, and pop stars were wiry, beefy, bovine, beaming, brilliantined, priestly, aquiline, avuncular, handsome, lantern-jawed, gawking, agape, owlish, even fey; and in the realm of hillbilly music, they were either doughy or carried the withered, sunken, accusing faces you see in old Civil War photographs.

But none had been pretty like a girl, and certainly none had combined it with an absolutely assured male presence that was virtually palatable in every photo or recorded yelp and hiccup. 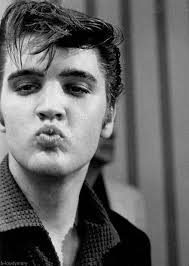 By re-inventing the male pop star as half-animal, half-girl (and becoming a unicorn-beautiful Satyr/ louche sex fiend in the process), Elvis Presley not only made the white world safe for his feral (albeit compact) r’n’b/Cajun-Appalachian-Opry crossover, but perhaps more importantly, he spoke to the un-voiced wish of millions of American girls: that their objects of desire did not have to resemble ManBulls like Vic Mature, but rather the ones they wanted to fuck could actually look like the best part of themselves.  The fantasy a young girl saw (or wished she saw) when she looked in a mirror – the heart shaped face, the fucked-to-bliss almond eyes, the wet liver-puff lips – could now be pinned on a Real Boy, and that real boy played real sex music, barely hiding a half-masted woody while drizzling innuendo and cat-in-heat howls over lyrics about trains and milkcows and momma.

Girls could now dream of fucking someone prettier than they were;  girls, many of whom were drawn to that lonely long-lashed angel who promised them a sensitivity the Shop Class boys could never offer, now had someone who embodied their romantic hopes, as opposed to their romantic fears.

The lasting aspect of the cultural tsunami triggered by Elvis the Pretty was threefold:

Elvis made it safe for mainstream American girls to desire the sensitive.  Brando and (to a greater degree) Tony Curtis hinted at this, but Elvis bought it home; he had the same gently sculpted, edgeless face that you saw on the humanized bunny dolls that Sharon, Ruth, Beverly, and Gloria had been snuggling with in their beds since before they could speak (or squeal).  Like McCartney a decade later, his almost unfinished face was only a half-step away from the quickly-drawn hearts a girl might scrawl in the margins of her Social Studies textbooks.  Now, contrast that to Sinatra; Sinatra was very nearly beautiful, but he had a roughly hewn gob that was more Rushmore than David.

Secondly, Elvis cast the template for the look of rock, and by that, I don’t mean the obvious rockabilly rebel pose or ghoulish quiff; by introducing that gender bend, by asserting that the masculine and the feminine, bundled up in one lithe and saucy package, could sell sex and song (and all the ancillary marketing that goes with the exploitation of teens damp and engorged), Elvis announced that the rebellion, the break from the past, would not just be musical, but sexual.

And finally and most importantly, by introducing the feminine into the mainstream cultural vocabulary, Elvis drew the line in the sand that identified the battleground for the future culture wars.  From that moment forward, from the first Wynonie-esque honk that lanced from his lopsided lady-lips, it would be freaks vs. straights.  The spirit of the 1960s, including its fullest blooming in the frippery of Haight Ashbury, the fervor of Stonewall, and the fuming junk-drones of the Velvets, begins when Pretty Elvis bursts on the consciousness of mainstream America in 1954 – 56.  The delineation of the Shirts and the Skins in the Culture Wars would not have been possible without Elvis’s absolutely brilliant and adamantly natural ability to be a true man and a true man-girl.

Now, having said all that, does the music matter? 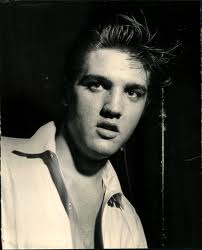 Of course it does, and much of it is brilliant, but most of us can find more satisfying (and savage) r’n’billy with our eyes closed. Sure, his music was a great ticking-and-shaking shriek across the landscape, but it was the shattering, shuddering specter of the gorgeous man-woman/woman-man shaking his hips like a belly dancer on a State Fair Midway that made America, especially the little girls who had been seeking an ideal companion who shared their curves and kitten-gentle eyes, buy into the revolution.

Now, Elvis isn’t as big as he used to be.  See, if you came of age in the 1970s (or earlier), Elvis was a slurping, onyx-haired Golem of cool and kitsch whose name was synonymous with rock’n’roll.  At one time in the Land of Rock, Elvis Presley was considered the supernova against which no sun block could provide adequate protection.  I am just old enough to remember this time, when all roads led back to Elvis, and no conversation about the history and creative shape of rock music could be had without Elvis being referenced.  A silhouette of Elvis at the microphone (or Elvis holding his guitar, splay-legged, or even merely an un-detailed rendering of his profile) could literally represent the idea of rock’n’roll.  As late as, say, 1979, it was unimaginable that you would have a generation of music fans – knowledgeable or casual — who barely gave a shit about Elvis.

But relatively quickly – by, say, the mid or late 1980s – Elvis’s ubiquity dissipated.  There are a lot of reasons, and we can address those elsewhere.

And I miss him.  And it’s time to reconsider him and honor him for what may have been his greatest achievement:  as the father/mother of the feminine in rock, and it was the gender blend/bend that made rock what is:  the language of the anthem of all outsiders.

ABCs of MTA Funding at the NY Transit Museum