Note: I didn’t post last week, partly because of the holiday weekend, and partly because I was so sad to learn that John Loscalzo, Brooklyn Bugle’s founder and publisher, had died suddenly. Writing for this blog has been a pleasure, and I will miss John and his openness to what one obituary called “the writers’ random cultural obsessions.” I can’t think of a better memorial to John than to continue it. Thank you, Claude Scales, for encouraging me to post and to everyone for reading. 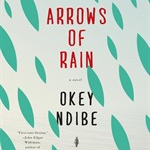 “A story that must be told never forgives silence,” according to the grandmother of Bukuru, the main character of Okey Ndibe’s debut novel “Arrows of Rain.” Femi Adero, a young reporter, is sent out to cover the story when a prostitute’s body washes up on a beach. Set in a beachfront city in the imaginary country of Madia, “Arrows of Rain” tells the story of one person’s experience of political and personal corruption. A local homeless man, known as Bukuru, claims to have witnessed the prostitute’s rape by soldiers, and tried to rescue her when she walked into the sea. Despite his claim Bukuru is arrested for murder. Femi witnesses the arrest, and then attends a legal hearing. At the hearing, Bukuru, who represents himself, insists that he is not crazy, that the prostitute was raped, and that General Isa Palat Bello, the country’s leader, also raped a prostitute, who Bukuru names.

Weeks later a court-appointed psychiatrist brings Femi into the prison where Bukuru is held. Bukuru has asked to meet him, and the psychiatrist is willing to bring Femi into the prison, under the ruse that he is also a doctor. To Femi’s surprise, Bukuru tells Femi “Like you, I started out as a young man working for a newspaper. But I was weak.” Now, Bukuru says, he wants to tell his story – a story that must be told – to Femi.

Bukuru’s tale, which he tells in a long letter to Femi that takes up most of the book, contains several parallels – to the post-colonial history of their young country, and to Femi’s own history. Femi is adopted, and his girlfriend’s parents will not allow her to marry a man “who was unaware of the source of his own genes.” Both Femi and Bukuru describe themselves as underdogs. In telling it, Ndibe moves from the cities of the coast to villages deep in the countryside and back again. He tells of love found and lost and of children separated from their parents. The themes of death and the arrival of Western ideas run hand in hand throughout the novel. In an epigraph, Ndibe thanks Chinua Achebe for “opening my eyes to the beauty of our stories,” and there are many echoes of Achebe’s “Things Fall Apart” here in the collision of the old and the new, the European and the African.

Throughout, the writing is graceful, clear, and often exceedingly funny. Here’s an excerpt from one person’s description of komanizim (communism) as something that makes everyone wealthy.

“So if I’m hungry . . .”
“You can go to your neighbour’s house and share his food.”
“I like it,” announced Iji. “Where can people find this komanizim?”
“It was invented by a man called Karl Marx.”
“God will bless him.”
“There is no God in communism.”
“Really? No God?”
“No. The people are their own god.”

Despite his humor, and despite his grandmother’s wisdom, Bukuru has waited a long time, perhaps too long, to tell his story, which touches Isa Palat Bello’s history and also, possibly, Femi’s. Bukuru was weak, and his weakness cost him a lot, and others more. It’s a fine metaphor, and Ndibe makes it into a moving and compelling novel. Let us know your thoughts in the comments.

Update: This post has been updated to correct the spelling of Mr. Ndibe’s name.