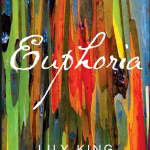 The dictionary definition of ‘euphoria’ is “a feeling of well-being or elation.” The elation of discovering, understanding and explaining something for the first time suffuses the three main characters in Lily King’s lovely novel “Euphoria.” The euphoria takes on a sexual aspect as well, and King explores all of these ramifications in her novel.

It’s the early 1930s. Nell Stone, an American anthropologist who has recently published a well-received study of the sexual lives of teeangers in an isolated tribe, and her husband, an Australian anthropologist named Schuyler Fenwick, called Fen, have sought but not found a new tribe to study together. A brief stay in the west over Christmas brings them into contact with an English anthropologist, Andrew Bankson, who introduces them to the peaceful Tam, who live near a hidden lake that is itself located off a bend in the Sepik river in New Guinea. (The story was sparked by but not based on a short period in the lives of Margaret Mead, her second husband Gregory Bateson, and her first, the New Zealand anthropologist Reo Fortune.) Nell and Fen settle in happily, plumbing the mysteries of the very traditional society. But all is not well – Fen is jealous of the reception Nell’s book receives and hopes to make his own mark, and a fortune, by a very different means: acquiring an artifact that western museums will value. Andrew comes for a visit and then must stay for an extended time as he recovers from a fever.

It’s during the period of his fever that Fen explains to Bankson that he’s seen, in their previous village, an object, covered with logograms, that would be the only example of writing developed in this part of the world. In his feverish state Bankson makes little of this “thrilling and impossible” description, even though Fen insists that he can find his way back to it. Bankson’s fever episode also provides King with the opportunity to relate a telling difference between Nell and Fen. Both nurse him, sometimes providing a damp cloth, reading to him, fanning him. But, says Bankson, “I shut my eyes and Nell disappeared, replaced by Fen who sat so much closer, the fan nearly swatting me, the wet cloths runny, water dripping in my ears.”

Whether and to what extent a person from another continent and another culture can understand a “primitive” one, and whether such societies are primitive at all or are just different, are questions still debated. The issues form a subtext for the novel, as the three main characters figure out their fieldwork methodology and debate their conclusions, even as they immerse themselves in Tam practices. Of course, they’ve brought their own society’s taboos and standards along with them, and King does a terrific job illustrating the sympathies and experiences of the Westerners, and suggesting how those experiences influence their interpretations of what they observe each day. Each of them is from a different continent as well, and their hesitations and conflicts drive their story forward.

Fen’s competitive approach to the work brings about the final resolution of the story. “Euphoria” is a memorable, lucid and deeply satisfying exploration in a fully realized if completely foreign setting. Read it.

Brooklyn Bugle Book Club: “My Family and Other Hazards” A Memoir by June Melby