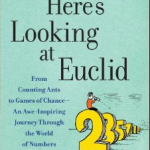 We all learn to count, add, subtract, and do our multiplication tables in elementary school. From there we move on to more advanced calculations, geometry, algebra, a smattering of trigonometry, and, for some calculus, and then most of us are done. Much of what we learn – Euclidean geometry and the Pythagorean theorem – was known to the ancient Greeks, and the rest was developed a few centuries ago. As Alex Bellos puts it, in his eminently readable history “Here’s Looking at Euclid,” by “age 16, school kids have learned almost no math beyond what was already known in the mid-seventeenth century.” That’s because humans figured out the math basics centuries ago.

But we don’t learn this history, and that’s what Bellos explores in what he describes as his journey in the world of abstract mathematics. Indeed, his travels take him to India, Japan, and the United States (Bellos is based in the UK). He discusses concepts of time and ways to count its passage with an academic who studies the Munduruku, an indigenous group of the Brazilian Amazon whose language has “no tenses, no plurals, and no words for numbers beyond five.” Bellos describes his frustration when his subject can’t tell him how long his trip to the Amazon took. But Bellos learns that our linear understanding of numbers is not so deep-rooted as we would like to believe, and he draws on modern neuroscientific research to outline an explanation of why.

From there he goes on to explore counting, in base 10 of course, but also in base 8, base 2, base 12 and a particularly interesting exploration of a historical use of base 20 (Bellos makes a solid case for why base 12 might be more useful than base 10, even for those of us with the usual number of fingers). Bellos uses a numerologist’s analysis of his name (Alexander is better than Alex) as a jumping-off point for an exploration of some of the properties of numbers, including squares, which then leads him through the Pythagorean theorem to Euclidean geometry and thence to origami. Other chapters discuss the useful concept of zero and its role in multiplication (and different algorithms for multiplying, and oh, by the way, a brief exploration of where the word ‘algorithm’ comes from), and the properties of pi. Along the way he touches on the lives and work of the mathematicians who spent careers calculating the digits of pi, among them the brothers Gregory and David Chudnovksy, who have devised a formula approximating pi.

An entertaining chapter about puzzles starts with a discussion of word puzzles and magic squares, and then goes on to Sudoku, which is, Bellos says, “math by stealth. Though Sudoku contains no arithmetic, it does require abstract thought, pattern recognition, logical deduction and the generation of algorithms.” The Sudoku discussion leads Bellos to a discussion of the concept of the unique solution, and from there he explores the branch of math called combinatorics, which involves the counting of possible combinations. Tangrams make an appearance, as does Martin Gardner, for many years the writer of a regular column in Scientific American.

Even if the basics don’t change – “[t]he theorems of Pythagoras and Euclid are as valid now as they always were” Bellos writes – there are plenty of insights to learn from the history. Read this entertaining and interesting book, and the world around you will appear slightly different and even more interesting.