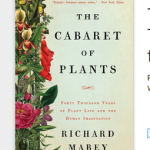 Plants give humans many things: Oxygen. Shade. Beauty. Food. Scientific insights. Subjects for works of art. Metaphors. It’s tempting to anthropomorphize them, and that’s been our habit for the last several hundred years despite biologists’ division of plants and animals into separate kingdoms. Richard Mabey’s collection of essays provides a wide-ranging historical survey of the relationship of humans and plants as filtered through the human mind. At the same time, he interleaves recent biological developments illustrating how poorly our analogies capture the variety and splendor of plants.

Mr. Mabey’s generous scope allows him to address many forms of human imagination. He begins at the beginning: neolithic cave paintings display many renderings of animals, but comparatively few of plants. It’s not clear why this disparity exists, or even if it just reflects the chance survival of some but not other media, though Mabey proffers his own theory: “Not yet part of early culture and belief systems, kept outside the dark theaters where the human imagination took flight, undomesticated and unrevered, plants were still essentially wild.” It would take another few millennia for depictions of plants to become common. Nonetheless, Mabey posits, from the very beginning, plants:

Were used very freely, . . . as if floral and foliate growth somehow echo the dynamic processes of our imaginations. If animals have chiefly been metaphors and similes for our physical behaviour, plants — rooting, forking, branching, twining, spiralling, leafing, flowering, bearing fruit — have. . . come to be the most natural, effortless representations of our patterns of thought.

In other sections Mr. Mabey describes trees, and our imaginative and spiritual relationship with them. There’s a section he calls “The Victorian Plant Theater” in which he explains how ferns became decorative elements for clothing as well as houses, and the simultaneous development of greenhouses to display floral samples brought back to England by its many explorers. (It’s a nice, and relevant, twist that the rib and fork structure of the Amazon lily, Victoria Amazonia, provided the inspiration for the design of the Crystal Palace.) 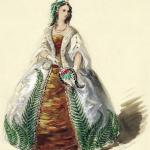 There’s also a section he calls “The Shock of the Real” in which Mabey explores the ways in which plants fell out of metaphor, particularly during the Enlightenment. Newton’s apple gives Mabey a chance to explore the history of apple cultivation: bears played a crucial role. A chapter describing the development of our understanding of photosynthesis follows, and then a look at carnivorous plants: their discovery puzzled Romantic thinkers and “unsettle[d] received ideas about the distinctive character of plants and their place in the natural scheme of things. . . “

Throughout, the writing is beautiful and deeply felt. Here’s how Mabey describes the behavior of olive leaves, illustrating why they are so beloved of painters:

Even in a breeze olive trees seem to shimmer in alternations of green and blue and silver, the undersides of the leaves showing matt grey, and the angled, resinous upper surfaces reflecting the sun in flashes of burnished bronze. The leaves themselves are rigidly fixed to the branches, but these are as flexible as willows so that as they move their shadows flicker through the interior of the tree in a show of natural chiaroscuro.

“The Cabaret of Plants” ends with a few short chapters about recent developments in biology, including a description of the ways in which plants communicate: by electrical pulses that attract insects to nectar, by the release of pheromones that warn neighboring plants of attacking insects, followed by the production in the neighbors of bitter tannins that repel insects. Plants also appear to communicate through root systems in “a vast signalling network.” There’s so much we don’t know, but it appears that plants are far from the static, passive, decorative and food objects we make them. They may even outlive us.