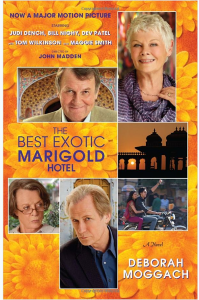 Until I came across a copy in the local branch of the Brooklyn Public Library, I had no idea that “The Best Exotic Marigold Hotel,” now a Major Motion Picture starring a slew of great British actors, started life as a book. But indeed it did, in 2004, and the book has just been reissued to tie in to the movie, with a bright orange-yellow cover. So of course I picked it up.

The story opens in London, where elderly Muriel has been getting a lot of publicity after having been left in an the emergency room cubicle of a crowded London hospital awaiting a bed. Her exhausted Indian doctor, Ravi, goes home to find that Norman Purse, his English father-in-law, has moved in. Norman has been kicked out of his most recent nursing home, for unspecified but easily imaginable misbehavior. As tensions rise between Ravi and his wife, Ravi and his cousin Sonny cook up a plan to develop a retirement home in India and eventually, though for very different reasons, both Norman and Muriel end up there. So do a married couple, the Ainslies, a BBC retiree named Dorothy, a Sussex widow named Evelyn, and various other single or widowed ladies.

Once they arrive, the new residents are taken care of by a manager who may or may not have their best interests at heart, a staff of decrepit retainers, and a former assistant to a podiatrist (it takes them some time to understand why the Best Exotic Marigold’s staff nurse, the manager’s wife, is interested mostly in their feet). They are subject to cross-cultural mishaps and some very funny misunderstandings. But in the best British tradition, they muddle through and make a go of things.

The book makes some gentle comparisons between Indian and English ways of treating the elderly, not to mention comparative ways of viewing poverty. There is personal growth, especially among the retirees; there is a bit less among their needy adult children. Things end happily for some, less happily for others, and a few souls go gently into that good night (well, many of the characters are elderly).

As you can tell, the new edition features famous British actors on the cover. I’ve yet to see the movie, (and I haven’t seen the trailer again since I read the book) so I am having a good time guessing which actor plays which character. Bill Nighy would be entirely in character as Norman Purse, but maybe he’s cast against type and is Doug Ainslie? Maggie Smith must be Evelyn, there just isn’t any other role for her. Judi Dench might be Muriel, or Mrs. Ainslie, or she could be Dorothy. Of course, movies being what they are, the entire story might have been rewritten with changed emphasis, so all my guesses might be wrong.

What do you make of my predictions? The book? Have you seen the movie? Let us know in the comments.

Brooklyn Bugle Book Club: A Visit From the Goon Squad