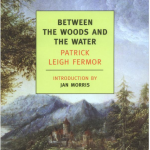 Over the past few years I’ve noticed how many of the great books that have come into the house have been classics reissued by New York Review Books (NYRB Classics). They cover an amazing range, and our household has enjoyed a lot of them, including:

All of Patrick Leigh Fermor’s travel books – A Time of Gifts and Between the Woods and the Water are the best known. In them Patrick Leigh Fermor describes a walking trip across Europe in 1933-35 — he was 18 when he started —  from Rotterdam to Istanbul. The books, especially the second, are lovely; they are also elegiac, because they PLF wrote them years later, with full knowledge of the horrors World War II brought. PLF describes his trip through Romania and Hungary like a long, golden summer afternoon. (Sadly, Leigh Fermore died earlier this year without having completed his description of the final leg of the trip.) But he did publish other travel books. Mani, about the Southern tip of Greece, where Leigh Fermor lived, is also interesting. I just picked up his book about the Caribbean, The Traveller’s Tree.

Names on the Land, by George R. Stewart – A whimsical and fun to read but academically rigorous study of American place names from 1492 (and earlier where possible).

The Snows of Yesteryear and Memoirs of an Anti-Semite, by Gregor von Rezzori. The former a memoir, the latter a novel, of growing up in Central Europe, before and during the Second World War. I hesitate to make the Nabokov comparison, but Nabokov did keep springing to mind, particularly Speak, Memory.

Stoner, by John Williams – If it were written now, the title would mean something else. But it’s just name of the main character, a Midwestern academic in a misalliance worthy of Edith Wharton, if she had written about another part of the country. It’s a memorable book.

The Long Ships, by Frans G. Bengtsson – A tale of Vikings from around the first millenium. Characters travel as far as Constantinople, are enslaved in Spain, convert to Christianity, go on Viking raids, and defend their own farm. Perfect for the beach or a long plane ride.

The Education of a Gardener, by Russell Page – Basic knowledge for gardeners and landscape architects, this one is perhaps not a page-turner, but it will make you look at the gardens around you in a new and thoughtful way. And it’s beautifully illustrated.

I could go on. NYRB always has a booth at the Brooklyn Book Festival, to be held this year on September 15-18, and I always like seeing what they’ve brought. And Court Street Books has a full bookshelf devoted to the press, it’s worth checking out.

Have you read any of these books? Did you like them? Which NYRB books are your favorites? Discuss in the comments.