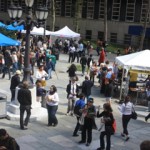 Take a beautiful day, throngs of book lovers, approximately 100 panels highlighting the work of more than 260 writers, plunk it into the center of literary America and you have the Brooklyn Book Festival.

There was a lot to choose from, and that doesn’t include the nearly 150 vendors, including my favorite NYRB Classics and BookCourt. Others present included literary magazines, small presses, and local university presses, including NYU Press and the New School.

This correspondent attended two panels, and I learned something useful: I should have done more homework when I picked my panels. I attended the panel titled “Extreme Weather, Scarce Resources, and Climate Change” and heard a clever but perhaps not entirely helpful reframing analysis asserting that global warming, combined with the end of the Cold War and what one writer called a “neoliberal economic restructuring” is creating chaos in the tropical zones. Already tense hotspots such as the Horn of Africa are seeing increasing conflict. All three writers (Christian Parenti, Mark Hertsgaard, and Anna Lappe,) and the moderator are from The Nation, and while the Nation is a great magazine, it might have been more interesting to hear a more nuanced discussion of the political issues involved in facing climate change in the US.

Later on I went to the “Politically Incorrect Parenting” panel, which included Adam Mansbach, author of “Go the F**k to Sleep” as well as Ta-Nehisi Coates and Alice Bradley, and enjoyed that a lot more. The St. Francis screening room was full, and the audience ranged from infants to grandparents. The panel concluded that men are increasingly able to express their ambivalence about the joys of parenting. There was an interesting discussion about talking with kids about issues such as race and class. I can’t say I came away with any useful parenting tips, but it was very healthy to hear as a response to the question “What parenting mistakes have you made?” the answer of, approximately, well, I can’t really think of any – I take each day as it comes. My first response was to think, of course you’ve made mistakes, but kids are resilient, they’ll get over them. On further thought, though, this attitude seems about right for parenting each day: here’s where we are, how we got here doesn’t matter, it’s what we do from here that counts.

So what’s to complain about if a discussion makes you think? Altogether it was a very satisfactory Festival.

Flavor, Fun and Food at the Brooklyn Local