Anne Hathaway and Robert DeNiro were in Cobble Hill this week filming “The Intern“. The shoot happened around Cheever Place and Cobble Hill Park. The production will reportedly be back later this month.

DeNiro plays the title character who works for a tech company run by Hathaway. The film is scheduled for a September 2015 release.

During an earlier shoot this year in the neighborhood, DeNiro enjoyed an impromptu viewing of the World Cup at a local resident’s home.

The shoot was an opportunity for some residents to tweet pics of Hathaway and DeNiro on set.

@olv DeNiro in the hood. #the intern Cobble Hill bklyn. Will be there again tomorrow. Clinton & congress. pic.twitter.com/0iFPfpEgTg

Sorry, Cobble Hill pooches, you'll have to wait until after THE INTERN wraps. pic.twitter.com/4VRHgRrHcR

This just in from Jane Greengold – it’s the last year for Impaled Pumpkins at Kane and Strong. How can you be part of history? Read on:

For years, with the help of friends and family, I have impaled 100 pumpkins on the spikes of the iron fence on the corner of Kane and Strong in Cobble Hill for Halloween. Every pumpkin is unique. The impaled pumpkins are left for months, to age as nature commands, into gnarly remnants of themselves.

This will be my last version of Impalements at this location. Next year, it may appear at a new location.

Please join in for this final year, and help impale the most heads ever. Everyone can bring head. There are 274 spikes so there is room for a lot of participation.

choose the right size and kind of pumpkin – 4 ¾” – 5” inches in diameter, taller than it is

round, and soft enough to carve;

LEAVE THE TOP ON;

cut a 3/4” square hole in the middle of the bottom (for the spike);

remove the innards of the pumpkin through the facial features; and

Bring the carved pumpkin to the corner of Kane and Strong between 3 pm and 7 pm on October31, 2012. We will impale it!

Mettle, a documentary about people who collect recyclables for cash—at the risk of arrest or enormous fines—will be premiering at the Jalopy Theater on Sunday, July 28th at 7pm. Cobble Hill resident Andy Arrow who produced and directed the film, says:

Each day across New York City, thousands of resourceful citizens, who really seem to need the money, and who aren’t bothering anyone, collect recyclable material from the sidewalk—discarded bottles and cans, and household appliances—and redeem these items to earn money. You will get to know several of these people in the film, and hear their stories, and I think it’s likely that you will appreciate their positive outlook, sense of humor, and strength of character.

More information is available on the film’s Facebook page, or on Jalopy’s site.

The Cobble Hill Association will sponsor its annual Summer Cobble Hill Park Concert series over the course of four weeks: July 18, July 25, August 1 and August 8. Musicians for the live event will be announced in the near future.

The park is located at Verandah Place and Clinton Street. 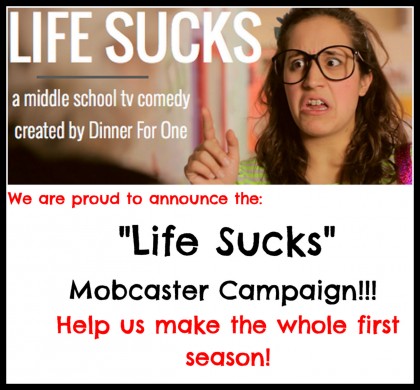 BookCourt at 163 Court Street in Cobble Hill will host Thea Goodman, author of “The Sunshine When She’s Gone,” with a reading, Q&A and signing on Monday, March 18 at 7 p.m. Drinks will be served!

“Her book is a fresh and funny debut novel about marriage and new parenting—about the love, longing and ambivalence exposed when a husband takes the baby on a highly unusual outing,” BookCourt tells CHB.

More about the book

When Veronica Reed wakes up one frigid January morning, two things are off—first of all, she has had a good night’s sleep, which hasn’t happened in months, and second, both her husband and her baby are gone. Grateful for the much-needed rest, Veronica doesn’t, at first, seriously question her husband’s trip out to breakfast with baby Clara. Little does she know, her spouse has fled lower Manhattan, with Clara, for some R&R in the Caribbean.

Told through alternating points of view, The Sunshine When She’s Gone explores the life-changing impact of parenthood on a couple as individuals and as partners. Thea Goodman brings us into intimacies made tense by sleep-deprivation and to losses and gains made more real by acknowledging them. Here is the story of a couple pushed to the edge and a desperate father’s attempt give them both space to breathe.

Thea Goodman has received the Columbia Fiction Award, a Pushcart Prize Special Mention and fellowships at Yaddo and Ragdale; her short stories have appeared in several journals, notably New England Review, Other Voices and Columbia. Born in New York City, she studied at Sarah Lawrence and earned her MFA from Brooklyn College, CUNY. She has taught writing at The School of The Art Institute of Chicago, and lives in Chicago with her husband and children.

Two cultural spaces are opening at 47 Bergen Street in Cobble Hill, next door to the Invisible Dog gallery: Recession Art, an affordable art gallery and store; and the Beam Center, a non-profit learning and youth arts development organization. Both organizations have held shows and events in the Invisible Dog space before, and will collaborate there again in the coming months.

Brownstoner reports that this is the first permanent location in Brooklyn for both organizations. The “Grand Re-Opening” of Recession Art is scheduled for March 9, with regular hours 1-7 p.m. Wednesday-Saturday, and 1-5 p.m. on Sunday. (Photo: Brownstoner)

The next jocular, wonderfully educational Homer Fink’s Hidden Walking Tour takes place this coming Saturday, April 21, at 11 a.m. Learn about the odd, weird, controversial and amusing history of America’s First Suburb over a sprawling 90 minutes of fun, led by the faithful kingpin of the Brooklyn Heights Blog, Cobble Hill Blog and Brooklyn Bugle. More info is available by clicking on the black box at the top left of the BHB home page. 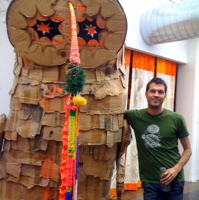 Brown with one of many strange objects in Etsy’s offices

If the décor of Etsy’s headquarters in DUMBO is any indication of what shoppers can find on its extremely popular website, then those in search of an octopus arm sculpture are in luck.

Billed as the only marketplace for buying and selling handmade goods online, Etsy was founded in 2005 by Rob Kalin, Chris Maguire, and Haim Schoppick with the motto “Buy, Sell, and Live Handmade.” Adam Brown, Etsy’s public relations manager, explained why the site is preferable to eBay for a particular kind of consumer.

“I view eBay as more of like a garage sale or a flea market where you’re always trying to get the lowest price,” he said, seated in a conference room meant to look like the inside of a spaceship, I think. “It’s like looking in somebody’s junk drawer of stuff, whereas if you come to Etsy, you’re looking at things that are handmade.”

Etsy shoppers will also find craft supplies on the site, as well as vintage goods, which are defined as items older than 20 years. They depend on consumers to flag potentially illegitimate objects, and the customer support team then investigates the claim.

“We rely on those people in a way to help us maintain the integrity of the marketplace,” Brown explained.  Etsy is nothing if not eclectic, a fact reinforced with a single glance around the office space, which was among the largest and most colorful I’ve seen in my travels around Digital DUMBO (aka NY Digital District).

Initially run out of an apartment in Ft. Greene, Etsy relocated first to an office at Flatbush and Myrtle Avenues, and then on to DUMBO. Staying in Brooklyn was important not only because so many employees live in the borough, but because it felt like home. Oh, and there are creative types nearby. Lots of them.

“We take a great deal of pride in it,” Brown said of Etsy’s DUMBO base. While it’s technically a digital company, Brown thinks Etsy has little in common with the myriad marketing/social media/advertising/graphic design agencies in the neighborhood.

“We just came here more because of the creative side of it than the digital side,” Brown stressed. “I think that wasn’t as important to us as the fact that there are actual artists studios.”

He conceded that being in DUMBO has helped with recruitment, because potential hires want to live in Brooklyn and are aware of the digital opportunities in DUMBO. Etsy employees receive one hundred dollars to spend on the site to decorate their workspace, and while most workers are technologically savvy, the typical Etsy seller need not be.

“Creating an Etsy account is about the same as setting up a Facebook account,” said Brown, because all the user needs to do is input copy and upload pictures. “Obviously the more you are willing to learn about stuff…the greater your chances for success.”

Available for purchase on Etsy are items ranging from earrings to blankets; dresses to pillows; miniature pumpkins to tutus for newborns, all handmade. And buyers can search for items by color, by seller location, by editor’s picks, or by something called “time machine,” that I was frankly too nervous to click on.

The site’s users are overwhelmingly female, and while Brown said they market to men, the ladies have been plenty kind to Etsy, which recently opened up a satellite office in Berlin as part of an effort to enhance its international presence.

“We’re hoping to do a lot more with the idea of social commerce, which means instead of searching for a scarf, there would be more tools to help you find a scarf that would have to do with other people,” Brown said.

Etsy gets 700 million page views a month, and the company is bigger than most in DUMBO, with around 100 employees in the office and a smattering of people around the country who work from home. It’s possible some of them know the derivation of the word “Etsy,” but Brown, for one, wasn’t telling.

“I kind of stopped answering [that question],” he said when I innocently asked what Etsy means. He instructed me to look it up (I did, and found only speculation), and then pick my favorite definition. So let’s go with this: Easy To Sell Yourself.

Which can be interpreted any number of ways.