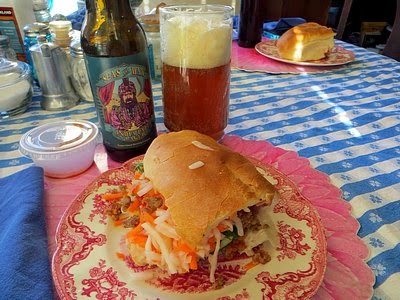 India Pale Lager? I’ve long been a fan of India pale ales, or IPAs as they’re usually called. I like their intense hop bitterness balanced, in the best of them, by a rich barley malt flavor. I didn’t know quite what to expect from this lager offering by Coney Island Brewing Company. “India Pale” made me expect big flavor, so I paired it with a Vietnamese bánh mì from Hanco’s, doused with some extra hot sauce.

I poured, and was rewarded with a full, foamy head. The color (photo above) was a golden amber. I took a whiff: the aroma was powerfully hoppy, with some floral notes. My first sip made my taste buds confirm the evidence of my nose. The hops have it! A few bites of the sandwich convinced me it was a good pairing. Still, I thought, while this beer goes well with spicy, flavorful food, is it something I’d want to drink by itself?

After a few minutes, though, the beer started to open up. I began to get some of the “[b]ig citrus and passion fruit aromas” promised on the label and on the brewer’s website. The flavor also became more rounded, with fruit overtones softening the hoppy edge. I realized that I should have taken the beer out of the fridge and poured it a few minutes before tasting.

I checked the ingredients on the website. Five kinds of hops are used: Galena, Warrior, and Simcoe, all of which are considered “bittering” hops; Cascade, which is moderately bitter and gives a floral aroma; and Citra, a fairly new variety that has quickly become popular (with some dissenters) and that accounts for the notes of passion fruit. There are four malts: two row barley (commonly used in the best beers and ales), malted wheat, oats, and biscuit malt (I had to look that up). The last three would, I believe, tone down the flavor of the two row barley, and, set against the assertiveness of the hops, explains the beer’s lack of any noticeable malt flavor or aroma.

On balance, this is a good beer. It would go very well with spicy food like bánh mì, Hunan or Szechuan cuisine, and the more picante of Mexican dishes. At a moderate 4.8 percent alcohol by volume, it shouldn’t get you in trouble too quickly. My preference continues to be for IPAs that balance the hops with malt. Still, I would drink this again, maybe with my next takeout vindaloo curry.

Next on my beer tasting agenda is Coney Island Brewing’s Mermaid Pilsner. I’ll be reporting on it soon.