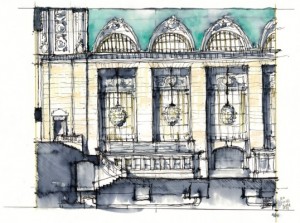 As part of its Centennial Celebration, the New York Transit Museum and the Architectural League of New York held a competition seeking modern reinterpretations of Grand Central Terminal. Contemporary architects and designers submitted more than 100 designs that captured and re-imagined Grand Central in media ranging from charcoal drawings to computer-generated landscapes. The jury selected 20 winning designs – and those designs will be on display at the Transit Museum beginning June 15. That’s Brooklyn resident Stephanie Jaszmines’ interpretation above.

The Transit Museum is located at the corner of Boerum Place and Schermerhorn Street in Brooklyn. More information here. And there’s more information about the year-long celebration of Grand Central Terminal’s centennial here.

Looking for something to do with your kids on Thursday, June 7, when schools are closed for Chancellor’s Day? Head over to the NY Transit Museum, where two Brooklyn teens will be performing at 1:30 and 3:00 pm.

Wolfe Edelman and Joanna Wagner, both 8th graders at MS 51 in Park Slope, will be performing. Wolfe is in the instrumental program and band and has been playing guitar since the age of seven. Joanna sings and is in the school’s show choir. They have created a transit-themed list of songs.

The Transit Museum is located at the corner of Boerum Place and Schermerhorn Street in Brooklyn Heights. Admission is $5 for children and $7 for adults. 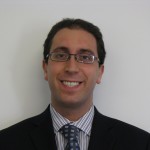 The Fall 2011 session of Subway Sleuths, the New York Transit Museum‘s after-school program for students with autism and working at the 4th/5th grade level, begins Tuesday, October 4. A required introductory morning of fun activities will be held on September 24. Click here for more information. The New York Times covered this innovative program in a story in August.