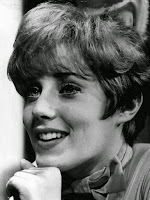 Lesley Gore, who died today at 68, is most remembered for her first hit, “It’s My Party (and I’ll Cry If I Want To),” which began a successful collaboration with Quincy Jones as her producer.

She was a Brooklyn native, but her family moved to New Jersey, where she attended the private Dwight School for Girls in Englewood. She was a sixteen year old junior at Dwight when Jones signed her to Mercury Records and she recorded “It’s My Party,” which went to the top of the Billboard pop chart in 1963. Her recording and performing career continued through high school and Sarah Lawrence College, where she studied drama and literature. She later did some acting; the photo above shows her as Catwoman’s sidekick Pussycat in the TV series Batman.

My favorite of her early hits (she continued to record, perform, and write music through much of her later life; her last album, Ever Since, reviewed favorably in The New York Times, was released in 2005) is “You Don’t Own Me,” described as an “empowering, ahead-of-its-time feminist anthem” by Daniel Kreps in Rolling Stone. The video clip above shows her performing it as part of the T.A.M.I. Show in 1964, when she was eighteen.

While “You Don’t Own Me” could be seen as an “answer song” to Joanie Sommers’ 1962 hit “Johnny Get Angry” (“I want a brave man; I want a caveman”), Gore didn’t see it that way, at least not when she recorded it. She thought of it as something a man could have as easily sung to a woman. Like all of Gore’s early songs, it wasn’t written by her. It was written by two men, John Madera and Dave White.

Gore was in college when she first realized that she was a lesbian. She didn’t announce this to the public until 2005, when she was hosting In The Life, a PBS show about LGBT issues. Her death was announced by Lois Sasson, her partner of 33 years.

While “You Don’t Own Me” was not an answer to any particular song, it responded to an entire era. The late 50s and early 60s were full of songs which instructed women on their role viz a viz men in society: not only “Johnny Get Angry”, which you mentioned, but also “Love and Marriage”, “Wives and Lovers”, and probably the most egregious of the lot, “Bobby’s Girl”. The fact that “You Don’t Own Me” was on the air was a grand signal that even if that era was not over, it would, in fact, soon be history.

It also occurred to me that 1963, the year “You Don’t Own Me” was released, was also the year that Betty Friedan’s The Feminine Mystique was published.

NY1 veteran reporter Vivian Lee was attacked by a whacko woman in a white sheet in Cobble Hill Friday morning.

DNAInfo.com explains that Lee was reporting on the death of Richard Schwartz, 61, who was killed after lightning struck a church steeple and sent debris tumbling to the street Thursday night.

A woman draped in a sheet climbed into an NY1 news van and began using Lee’s makeup and snacking on food, according to Lee and a witness. When the reporter told her to leave, the woman allegedly took a swing at Lee. “The van’s driver grabbed the woman and hauled her out of the van. As the three stood beside the van, the woman swung again, this time punching Lee in the neck. The driver wrestled the woman to the ground and held her until cops arrived and took her away,” DNAInfo says.

Lee was not seriously injured, and an ambulance was not called. (Photo: DNAInfo)

Mama, mia! Since chef Gordon Ramsay made over Carroll Gardens restaurant Mama Maria’s for the filming of his

The TV production sliced the restaurant’s menu down from 110 items to just 30, one of which is a special dish, Fox spokeswoman Joanna Wolff told DNAInfo. The menu still includes Italian favorites like a 10-inch pizza, lasagna and chicken parmesan.

“They cut down the menu so that each dish is better quality and more authentic, and changed some of the dishes so that the overall menu is a bit more modern, rather than strictly traditional Italian cuisine,” Wolff explained.

Aside from the entrees, tables have been covered with vintage newsprint bearing the restaurant’s name, alongside new artwork and a store sign with a more urban signature. The awning of the restaurant has also been removed and replaced with the simple sign.

The “Kitchen Nightmares” episode featuring the restaurant is scheduled to air this fall.

Celebrity chef and TV foodie Anthony Bourdain chomped his way through Brooklyn this month, stopping by eight restaurants, including the buzzy Chef’s Table at Brooklyn Fare, the three Michelin-starred restaurant on Atlantic Avenue in Boerum Hill. His triptych was featured in The New York Daily News Sunday, where Bourdain called Brooklyn “the nexus of world cuisine.”

The New Jersey native told The News that his Brooklyn excursion was prompted by cooks he’s met from across the globe raving about its eating scene: “Brooklyn is the nexus where everything is going on right now. Brooklyn is a melting pot. There are traditional Jewish delis. Caribbeans are a huge part of the culture.”

Among his other stops: Jay & Lloyds Kosher Delicatessen on Avenue U and Randazzo’s Clam Bar on Emmons Avenue in Sheepshead Bay; and Gloria’s West Indian Restaurant on Nostrand Avenue in Crown Heights.

Regarding Chef’s Table, Bourdain said that the restaurant’s serving syle is being copied in fine dining restaurants in Paris and Australia: “It is do-it-yourself. There is little overhead.” He called his Chef’s Table meal the “best that I’ve had in New York in a long time.”

His week-long borough excursion will be featured this fall on Bourdain’s Travel Channel series “No Reservations.”