April 25 is World Malaria Day and Interscope Recording Group (and Brooklyn Bugle Sessions alum) The Kin lend their song, “Waking Up Shining” to this powerful viral video. Spearheaded by The Backplane team to advance the important advocacy objectives of the Special Envoy for Malaria at the United Nations, the goal is to scale the web’s largest social systems to ensure the message of #endmalaria reaches the largest audience possible.

The CMJ Music Marathon is this week and while other folks are racking their brains about which bands to see, we here in the Brooklyn Bugle newsroom have it all figured out. You see, we’ve already featured many of the best artists playing this week’s fest in our Brooklyn Bugle Sessions.

First up – The Kin. The NYC based trio featuring Aussie brothers Thorald and Isaac Koren along with percussionist/legend Shakerleg (he’s Kanai Dutta meets Buddy Rich while channeling Animal) have the distinction of being our most viewed Brooklyn Bugle Session.

The band have also been generating quite a buzz recently. Along with We Are Augustines, they made the NY Daily News’ list of 15 Bands to See at CMJ 2011. Last week, Thorald and Isaac staged Dinner with Thieves, part dinner theater and part showcase at Australian restaurant Kingswood in Manhattan.

Bon Appetite writes about the experience:

Guests, who had signed up in advance, were told to order a special drink at the bar, at which point they got a packet of papers with a warning not to open and to await further instructions scrawled on the outside. It may have been the drink working its magic, but by the time the band burst in from the back stairs, angrily strummed an acoustic guitar, and demanded that its hostages march down to the basement (or else), I was actually down for some musical spectacle (rare for one as grumpy as I).

And they did not disappoint! No pyrotechnics, since that’s usually a bad idea in basements, but during and between courses, the band managed to happily distract me from the serious business of eating with an interesting mix of storytelling and songs. Their music, driven by acoustic guitar and two-part harmonies, fit the intimate space well, and they didn’t even make us help solve a murder mystery.

Also in attendance at the dinner, legendary producer Tony Visconti best known for his work with David Bowie and T-Rex. Seems that he’s got a thing for gifted musicians with a theatrical side – he’ll be producing The Kin’s new album. Not only that but Visconti, who regularly took bands to his mother’s Brooklyn home for dinner must also appreciate the fact that the Koren boys feature their mother in their performance piece. 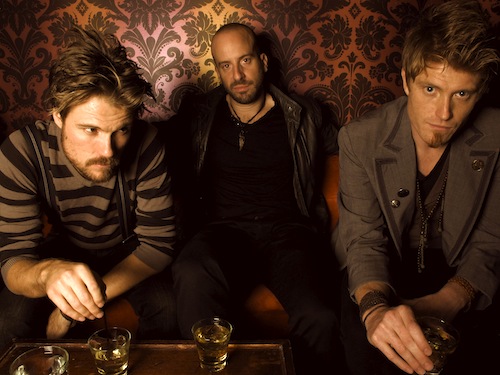 One of our favorite sessions was with John Michael Rouchell aka MyNameisJohnMichael. The New Orleans based singer-songwriter usually appears with his full band – featuring a brass section – but his stripped down performance here will have you thinking about Tom Waits or Tim Buckley in their heyday. MyNameisJohnMichael perform at the Living Room on Friday (10/21). Details here.

Locksley lit up our studio with a performance of their hit “The Whip” as well as a Bob Marley cover song. They’ll be playing CMJ 2011 Wednesday (10/19) at the Rockwood Music Hall. Details here.

Last but certainly not least is We Are Augustines. Our interview and other music from the band will be posted later this week but we couldn’t hold back on sharing their performance of “Strange Days” with you right now. They’ll be performing Wednesday (10/19) at the Ace Hotel. Details here.

Are you hitting CMJ this year? Who are you seeing? Comment below!

Aussie brothers Thorald and Isaac Koren along with a former subway performer/percussionist known only as Shakerleg make up the NYC based combo The Kin.

In our latest Brooklyn Bugle Session they perform their own “Downtown Train” along with a rousing cover of Bill Withers’ “Who is He and What is He to You”.

Check out our interview with them and learn more about the unique way they’ve invented to spread the word about their music. It might just surprise you!

The Kin are currently playing a residency at Rockwood Music Hall [196 Allen Street, Manhattan] every Thursday.