So I was not especially engaged, as so many of my peers were, by the prospect of their reunion. But my personal feelings about the Replacements are hardly relevant to the point I’d like to make here.

RELATED: Revisiting My Thoughts on The Replacements and The Captain (Plus Let’s Honor Malcolm Young)

The Replacements, 3/4ths of whom are still alive.

We are so eager to see the Replacements, to bask in the bittersweet recall of a youth happily spent in low-ceilinged nightclubs chatting up cat-eyed college girls and haunting narrow record stores befumed by the musky scent of used vinyl, that we overlook the fact that it’s debatable whether the band on stage is actually the Replacements. Personally (and I insert that caveat because, despite the righteousness of my ornery ire, I do believe that there is a lot of gray area here) I don’t buy it. Paul Westerberg plus Tommy Stinson doesn’t, in my mind, equal the Replacements. Stick Chris Mars behind the drums, and then we can talk.

See, whenever I consider the reunion of the so-called Replacements, I remember this: If Paul Westerberg went out on a solo tour, he would probably get a guarantee of (let’s call it) X dollars (“X” would be a decent amount of change to you and I, but that is not the point here). Now, if Westerberg and Stinson went out on the road billed as, oh, “Westerberg and Stinson,” that number would probably change to X times 5. But…if they call the same band The Replacements, the original “X” becomes X times 15. And X times 15 is a lot of money.

I can pretty much guarantee that this didn’t happen: After many moments – nay, years – of grave consideration, Paul Westerberg didn’t decide to “reunite the Replacements.” Instead, Westerberg very likely thought “I can make fifteen times as much money – shit, add merch and we’re talking twenty times as much – if I can rope Tommy into this and go out as the Replacements.” See, personally I have certain semi-articulated criteria regarding a reunion. Let’s examine these, shall we? If a band originally had four members, one writing/singing member going out with one other member who didn’t write or sing lead and only one other member who didn’t write or sing does NOT feel like a legit reunion to me. And don’t bring in the dead (Bob) or incapacitated (Slim) members issue…even Led Zeppelin, who stood to make about a billion dollars from a reunion tour, I mean literally a billion dollars, only performed as Led Zeppelin when they had three of the original four on-board, and otherwise went out as Page/Plant. 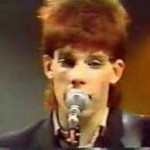 David Minehan, around the time he was America’s answer to Paul Weller.

(A wee bit of extra credit to the Fauxplacements for including the amazing David Minehan in the band on guitar; Minehan’s dynamic, slashing, bobbing moddy Neighborhoods were one of the brighter bands of the late 1970s/early 1980s.)

Let’s look into this a little further.

Now, the Buzzcocks are also out on the road (and have been, for many years) with “just” two original members. Yet I consider this a “legitimate” reunion, even though I don’t consider the Replacements legitimate. Why? Well, the two “original” members of the Buzzcocks in their current touring line-up were both primary vocalists and composers – in fact, the only singing/writing members of the band. Let’s take this a step further into history: Through much of the ‘80s and ‘90s, Pink Floyd toured and released records. This band contained two of the original four members of the band, and three of the four “prime” members of the band. Was this a real “Pink Floyd”? Why, yes it was. 1) Any band that includes three out of four “prime” members, including one of the prime vocalists, can always claim legitimacy; 2) Roger Waters is a bitter old sexist dickwad, and I endorse anything that made him frown. Having three-fourths of the prime line-up PLUS one of the prime vocalists, as the ‘80s/’90s Floyd did, means that you are way legitimate. 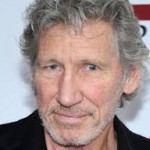 Using the same logic, if Mick Jones, Paul Simonon, and Topper Headon (and/or Terry Chimes) went out as The Clash (unlikely, but one never knows), would that be legitimate? Strangely, I’d have to say yes. I’m almost unhappy saying yes, but, “Scoreboard!” as Jim Rome might say. Going just by the numbers – 3/4ths of the prime members, and one of the prime vocalists – I’d say that was legit.

Yet, Tim, you’re still insisting the Replacements weren’t legit? Why, yes I am. A lead singer and the non-singing/non-writing bassist do not comprise a legit line-up, but just a money grab.

“Now, how about The Damned?” 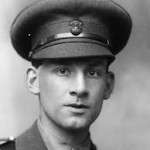 Poet Siegfried Sasoon, who came back from the dead to discuss the Damned with me.

Good question, Siegfried! See, legendary English poet Siegfried Sasoon has entered my consciousness and has now, strangely, joined this conversation. This is especially odd since Sasoon’s verdant, moving, tumbling and defiantly lucid poems about the horror of The First World War makes his work integral to understanding the extraordinary, almost incomprehensible suffering and loss the British endured during the Great War; yet I am not aware of him ever expressing an opinion about rock’n’roll (Tim Page is likely to correct me now, and draw my attention to a comment Sasoon made about P.J. Proby in a 1965 interview). Yet here he is, standing in front of me, asking about the Damned and puffing on a rather pungent Turkish cigarette! Its acrid smoke fills the room with memories of narrow, twisting, sunless alleys behind the ancient Spice Market! I ask if I can smell Siegfried’s tobacco-stained fingers; inhaling deeply, I imagine I am gazing heavenward, towards the impossibly beautiful arch of Santa Sofia’s dome. Naturally, he considers my action a little peculiar, and with a few soft words I explain that the scent of his Balkan Sobranie brand tobacco has brought my senses back to the extraordinary experiences I had as a University student writing haiku about new wave music while lying alongside the Bosporus. I recite an example for him –

“The Yachts Make Me Glad
Strong songs, great organ sound, yet
I sense much irony”

Sasoon, wavering between this world and the next, doesn’t care about my archival literary efforts (though he does express a mild degree of pleasure in another haiku that goes “Oh, Bram Tchaikovsky/I’m glad you left the Motors/to do Byrds + Who”). He is only interested in my assessment of the legitimacy of the current line-up of the Damned.

“The Damned! Two original members, like the Replacements and the Buzzcocks,” Sassoon notes, in a pleasant Cambridge lilt. “Legitimate or not?” 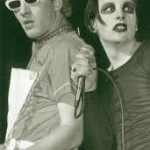 Captain Sensible and Dave Vanian of the Damned, whom I discussed with the hovering spectre of Siegfried Sasoon. I really wanted Siegfried to discuss his relationship with Robert Graves, but we didn’t get around to that.

“Totally legitimate,” I snap, “but with an asterisk! See, the two original members of the current touring and recording version of the Damned include the sole vocalist, Dave Vanian, and one of the primary writers, Captain Sensible. So I’m buying that one. I mean, primary writer, primary vocalist, and two original members. So, I mean, you have to buy that one. But why the asterisk? Because the current Damned are missing another primary writer – Brian James – and a key member, drummer Rat Scabies. In fact, if Scabies and James wanted to, for some reason, go out as the Damned, that would be legitimate too, even if it lacked the prime vocalist; because — and follow me here, Siegfried, because it’s an important point — a James/Scabies Damned would include one prime writer and one key member. And I define a key member, in this and most cases, as someone whose contribution to the band is so distinct as to make them essential to their recorded sound and live performance. I mean, I’ll definitely buy that the current Damned are the Damned, but I buy it a little less because it’s missing Rat Scabies. I mean, the Damned without Rat Scabies are sort of like the Who without Keith Moon; yeah, I’m kinda buying it, but it’s not really the same thing.”