Belief. Blackmail. Bribery. These are the three motivations for betrayal that one of the several spymasters in Simon Mawer’s new novel “Tightrope” give to Marian Sutro in the cold, gray world of dreary post-war London. “Tightrope” picks up shortly after the end of “Trapeze” (reviewed here), Mawer’s novel of Marian’s heroic deeds and miscues as a member of the Special Operations Executive parachuted into France. If you haven’t read the earlier book, skip to the end of this paragraph to avoid spoilers. Marian is returning to London after a year and a half in the custody of the Germans, first at Gestapo headquarters in Paris, then at a concentration camp. It takes a while for Marian to be able to return to daily life, and Mawer’s descriptions of her psychological struggles, which include some breakdowns and thoughts of suicide, are fully credible. Marian takes a job at the Franco-British Pacific Union; she marries. Horrified at the destruction caused by the atomic bombs dropped on Hiroshima and Nagasaki Marian has also become an ardent advocate for peace. It’s a wedge between her and her husband, and threatens to become one between Marian and her beloved brother Ned, an atomic scientist.

Mawer moves fairly slowly through Marian’s early post-war years, as his narrator pieces together Marian’s actions. It’s not altogether easy to do so, as Marian has had good training from the secret services, and knows how to cover her tracks. In “Trapeze,” Mawer describes Marian as a woman who is temperamentally an impetuous risk-taker whose behavior extends to her sexuality. As she matures in “Tightrope” Marian grows less impetuous – of course she’s experienced what Mawer describes as the full range of fear, from anxiety to outright terror – as her experience of fear slows her down. She remains in control of her sexuality, and feels able to act as she wishes, when she wishes – which means she seduces, or is seduced by, several men not her husband. It’s a nice contrast to the experience of her brother, Ned, whose sexual activities, in the 1950s when homosexual acts were against the law in Britain, can’t help but be compromising.

Novels about spies can be convoluted, with complex plots that are difficult to follow. Mawer remains close to Marian’s point of view for much of the narrative, and the reader is able to follow Marian’s view of events as they play out, even as she speculates about the moves, motives, and knowledge of the people – they are all men – she deals with. One motif is kriegspiel or blind chess; as a child in Geneva Marian had served as referee in her brother’s games with Clément Pelletier, who grew up to become the nuclear scientist Marian helped extract from Nazi-occupied Paris. Marian would like to see herself as the referee in the grand game she is playing, but comes to realize that she is, rather, one of the players. What she does about it, and the consequences, make up the final part of the book.

“Tightrope,” though a long novel, remains compelling and engaging, if perhaps not as taut as “Trapeze.” It’s a worthy follow up all the same, and a deeply interesting story of what motivates some people to acts the many of us might consider foolish, painful, or treasonous. 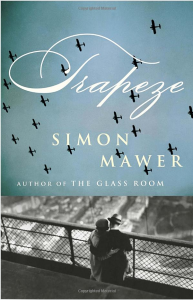 Marian Sutro, half French, half English, and raised in Geneva where her father was a diplomat, is living in London during the early part of the Second World War. Her parents are semi-retired, in Oxford, and her brother, a physicist, is working in London. Marian herself works in the Filter Room at Bletchley Park. When she is picked to train as an operative of the French Section of the Special Operations Executive she hesitates, but only briefly. During her training, she’s uncertain of her prospective role, though of course we know. One of the many interesting parts of reading this book is watching and responding to Marian as she figures it out.

Marian’s language skills are very good, and she thinks well on her feet. She has a tendency to disregard minor rules and to occasional impetuous behavior. Despite the insistence on secrecy she tells her brother Ned a bit of what she’s up to. And during her training course at a center in Northwest Scotland she “captures” a patrol of six soldiers while she and a friend are hiking on a rare day off. She’s not disciplined for this action, but not commended either – and when one of the six turns up again in her advanced training course, well, what she does is not entirely within the bounds of professional conduct.

Despite her continuing disregard of the niceties, or perhaps because of her ability to improvise, Marian is sent into the field, parachuting into occupied France to be in place for unspecified actions. And she has a dual mission – the authorities want to persuade another physicist, Clément Pelletier, who may once have been in love with the teenaged Marian, to escape from France to work on the development of the atomic bomb. Clément is living in Paris, and Marian’s trip to Paris, as well as her various actions there, are the crucial scenes of the book.

They are also among the tautest scenes in the novel. Mawer is adept at slowing down the pace to inject tension. His description of occupied Paris – the miserable, hungry people, the pewter and tarnish of surfaces in what was the City of Light, the stress of responding with just the right mixture of servility and dignity to German soldiers – is spot on. Mawer’s portrayal of female sexuality and the war’s effect on it is both sensitive and absolutely credible. And his use of Marian’s names (she has various code names, cover names, and field names) is shrewd.

Is Marian too clever for her own good? What do you think of her final impetuous decision and its consequences, for Marian and for the novel? Let us know in the comments.

You can read my review of Mawer’s nove “The Glass Room” here. Have a book you want me to know about? Email me at asbowie@gmail.com. I also blog about metrics here.