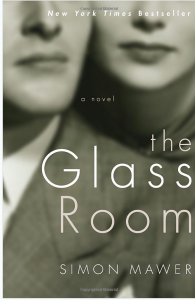 Viktor and Liesel Landauer meet and marry in the late 1920s. They live in small city in the newly-formed Czechoslovakia, about an hour’s train ride from Vienna. The Landauers, both descended from wealthy families – his manufactures automobiles – commission an architect to design a house for them. The architect bemoans the fact that man has been “building caves! But I wish to take Man out of the cave and float him in the air. I wish to give him a glass space to inhabit.”

The author explains that the German word glasraum can mean glass room, or glass space, and adding one letter, making the word glastraum, changes the meaning to glass dream.

A dream that went with the spirit of the brand new country in which they found themselves, a state in which being Czech or German or Jew would not matter, in which democracy would prevail and art and science would combine to bring happiness to all people.The architect went on to build skyscrapers in America. As for the Landauers, Viktor is Jewish, Liesel is not, and Czechoslovakia was to be overrun by Nazis.

But the novel is less about the Landauers, and, as the title suggests, more about the Glass Room. After living there for nearly 10 years, with two servants, their own two children and, in time, a governess and her child, the Landauers flee to safety in Switzerland. Eventually they go on to Cuba, and then the United States. The Nazis take over the Glass Room, using it as the site of a laboratory dedicated to the scientific classification of human phenotypes. Later still, it becomes, under the Communists, a hospital gymnasium used for physical therapy for children with polio. Throughout, two characters stay near the house, Lanik, the servant, and Hana, Liesel Landauer’s best friend. Both of them survive and, perhaps, thrive under the successive invasions and regimes.

The Glass Room itself is a constant, not quite a hearth, but the scene to which the novel’s action returns over and over. A lot of life is seen in that room, almost as if the room is a stage: there are seductions, betrayals, dances, a rape. And return and recognition. The Glass Room, and the house, make a permanent impression on all who lived or worked in it, and on some visitors as well. And even though the house could be considered the main character, the book contains characters who are deeply engaging.

It did not take much digging to discover that the Landauer House is based on the Villa Tugendhat in Brno. The architect of that house was Mies van der Rohe. The book is illustrated with schematic drawings of the house; even better are the photographs, available here. (The house has been restored and opened to the public.) But wait until you’ve read the book, as Mawer does a great job evoking the house, its inhabitants, and its impact on their lives. Do you agree? Let us know in the comments.

Brooklyn Bugle Book Club: “Carry the One” by Carol Anshaw