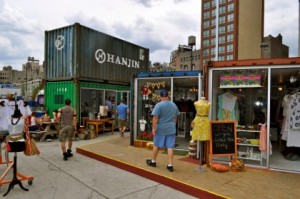 Fans of the wholly original Dekalb Market are going to have to find a new weekend play date for their urban retail and foodie fix. The landlord of the Downtown Brooklyn space—which opened last year at Flatbush and Willoughby Avenues—has informed its operators that they must vacate the premises by October. In its place will be the next stage of the burgeoning mixed-use City Point project.

The founders of the Dekalb Market—which houses an emporium of 60 boutique shops and eateries constructed from salvaged shipping containers—says they are disappointed by the developer’s plan to begin construction this soon, after being led to believe they would have five years to utilize the former empty lot. According to Eater, there is no word yet on where the market might relocate, although one potential spot is a private parking lot across Gold Street.

The operators of Dekalb Market sent this letter to their vendors:

Dear Container Shops,
As many of you have heard, our landlord has given us notice that they will begin construction this fall and therefore, we will be moving Delalb Market to a new location. While we have not received official notice, we understand the Landlord’s construction may begin as early as October.
While we are disappointed that the Landlord’s new development plans moved as quickly as they did, we see this as a great opportunity for Dekalb Market. By positioning ourselves as the first shopping center in history to move and reopen in the space of a few weeks we will be able to have a new “re-opening” with both the press and operations. The move gives us an opportunity to learn from the first year and make improvements and towards this end we will be conducting a survey to make sure we capture everyone’s input.
We have identified a couple of sites that would be ideal for the market in the Brooklyn area and are diligently working to make the transition work. We hope you will be able to continue with the Market in its new incarnation. We will provide an updated report to the new site and details regarding the move shortly.