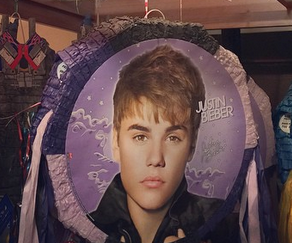 And we thought the big news at Key Food on Montague Street was the announcement of a Dietz and Watson food truck visit on September 11. Now comes word via Twitter of a Justin Bieber piñata on sale at there.

This, friends, is something the whole world wants and needs- the chance to smack ol’ Biebs around. His seemingly insane behavior over the last year is enough to fuel your aggression and bloodlust while hacking at Canada’s most hated export (yes, we’re including Rob Ford in our consideration).

YOU MAY ALSO LIKE: The New York Times is Idiotic, AGAIN, and It Gives Me an Excuse to Rave About Echo & The Bunnymen

Pardon us while we go buy one…make that two….

“@BrooklynBugle: @Todd_SimmonsNYC is that really a Bieber pinata? where?” RT Yes, indeed it is. Key Foods on Montague in Brooklyn Heights.

Apparently you can buy these Justin Bieber Piñata Kits on Amazon… and there are many videos on YouTube documenting the destruction of them including this one: 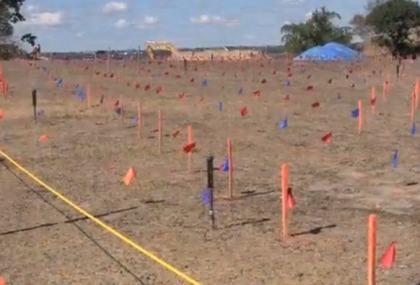 Karl Junkersfeld writes this about his new video:

Last weekend was the last opportunity to tour the construction of the new Governors Island Park Site. This park is especially relevant to Brooklyn Heights residents in that it is basically an extension of Pier 6 BBP, via free ferry, and offers an assortment of great public activities from which to chose.


Top on my list is the installation of 50 hammocks among 1500 newly planted trees. Being extremely lazy, this is basically nirvana for me. If they can manage to incorporate food and beverage service delivery to individual hammocks, it will become my second home. 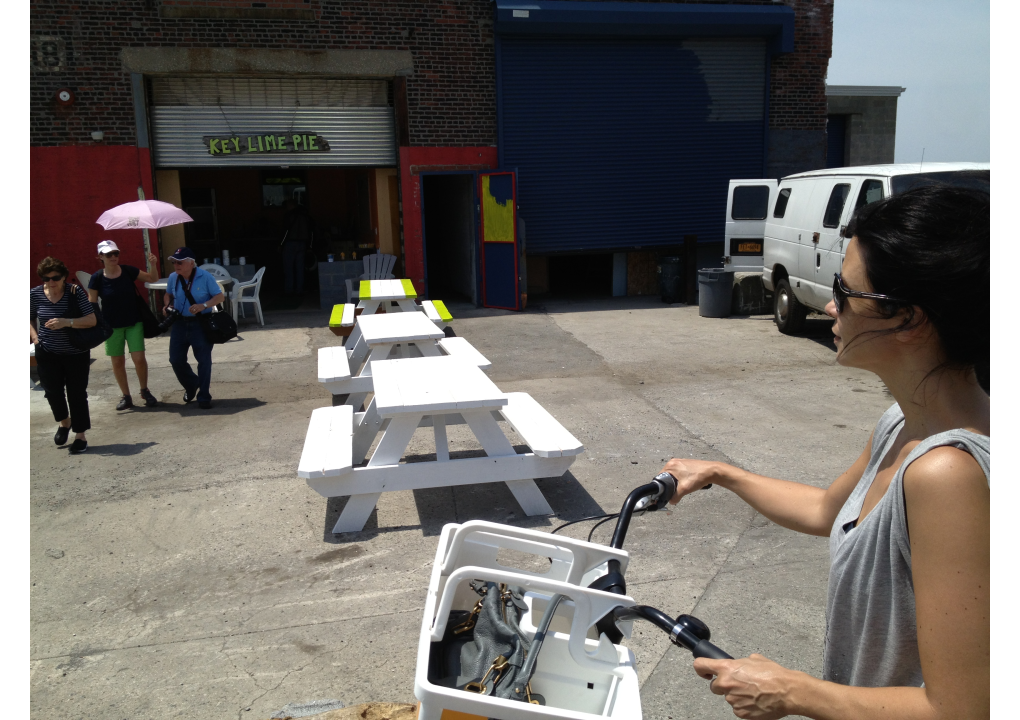 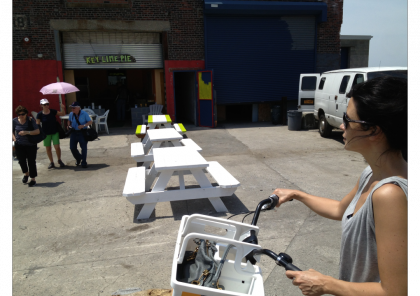 Looking for something to do with your summertime guests? Or want to see Brooklyn from two wheels instead of four? Dutch transplant Frank Muller has just the thing—Bikelyn, a series of tours given Mondays and Tuesdays each week (with private tours available upon request).

Muller has taken to his new city rather quickly—after moving here last year, he’s already become a licensed NYC tour guide and launched Bikelyn in part to flex his local knowledge. And Muller’s heritage makes bike tours a natural extension. “In Holland, you learn how to ride a bike as soon as you learn to walk. It’s not cultural like it is here. It’s just the same as buying a car.”

You can BYOB or rent a bike from Rolling Orange Bikes in Cobble Hill, where the tour begins. Monday’s tours are Williamsburg in the morning, and Red Hook in the afternoon; Tuesday’s tours are Park Slope & Prospect Park in the morning and Brooklyn Heights & DUMBO in the afternoon. For private tours, a minimum of four people are requested. Depending on your interests, Muller also makes some food stops, like Steve’s Authentic Key Lime Pies in Red Hook. And if you book a tour for morning and afternoon, Muller will in a free lunch at Moo Burger.

More information is on Bikelyn’s site and Facebook page. Morning tours are $49 and afternoon are $39.

The People Of The Internets Love Vine And Brooklyn Heights 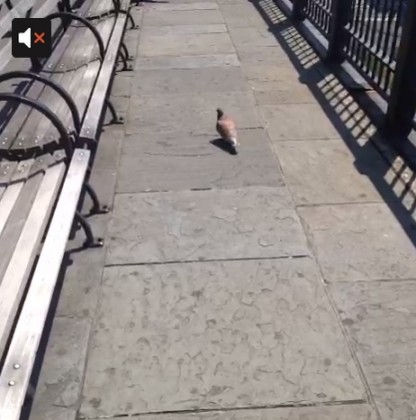 Vine, that video app thingy your “creative” friends desperately want you to embrace, is chock full of clips of Brooklyn Heights. Seems that residents and visitors alike can’t help but be inspired by our landmarked and beautiful neighborhood.

Here are some of our favorites:

And what does happen inside the dorms in the area: 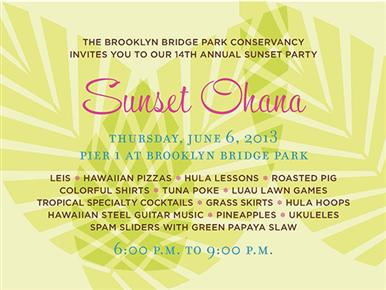 The Brooklyn Bridge Park Conservancy is having “Sunset Ohana,” its 14th annual (which seems to go back to when the Park was still a gleam in some local citizens’ eyes) sunset party at Pier 1 on Thursday, June 6 from 6:00 to 9:00 p.m. This year the theme is Hawaiian.

Our little slice of Hawaii on the Brooklyn waterfront will include authentic Hawaiian steel guitars and classic surf music, tasty island treats, luau lawn games, a tropical specialty cocktail, hula sessions, and much more. Be sure to wear your most colorful shirt!

Among the “tasty island treats” will be “spam sliders with green papaya slaw.” Can’t wait! (I’m not kidding.) 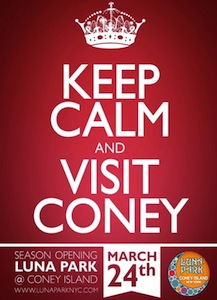 Following the reopening of Red Hook’s Fairway Market March 1—which was all but wiped out by October’s Hurricane Sandy—there’s more good news for the borough. Heights locals looking to hop the R train for Coney Island’s seasonal goodies now have an official green light. Last Sunday, the Luna Park rides reopened, after being washed over with 5 feet of seawater.

The BK Chamber of Commerce shares that “Coney Island’s colorful rides only just emerged from an extensive rehabilitation. Workers were still finishing the repairs when families began to crowd the entrances on Sunday morning.”

Alberto Zamperla, CEO of the firm that operates Luna Park, tells the New York Times, which covered the reopening, “Our commitment after the hurricane, from Day 1, was to be ready on time for this event.” The rehab included everything 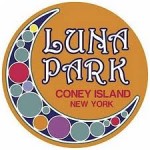 from replacing electrical systems to dumping go-carts brined in seawater.

Luna is one of two privately owned amusement parks that opened in Coney Island on Sunday. Much more in the NYT story. 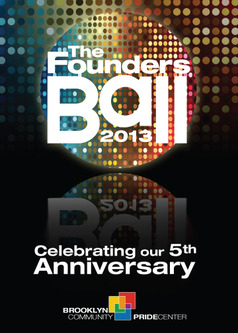 The Brooklyn Community Pride Center, located in Boerum Hill at 310 Atlantic Avenue, is hosting its Founders Ball on Thursday, April 4 from 6-9 p.m. at Dumbo Loft, 155 Water Street. The Ball is the organization’s major, annual fundraising event commemorating its 2008 launch and Fifth Anniversary.

This year’s event includes a two-hour cocktail reception with hors d’oeuvres, a silent auction and the first ever Founders Ball Awards honoring Tom Smith, Reg Flowers and Suzanne St. Pierre. Preceding the event is a VIP cocktail hour with celebrity guests; and following is the Junior Board’s after party.

The Brooklyn Community Pride Center is the only community center in Brooklyn dedicated to the LGBTQ+ community, with a mission to provide support & services to the borough via original programming and partnerships with like-minded organizations.

For information about the Founders Ball, contact Development Director Todd W. Fliedner at 347-889-7719 or tfliedner@lgbtbrooklyn.org. Tickets may be purchased online. General admission is $125.

Among Brooklyn Heights destinations, the following are on the menu… It is recommended you call and mention “Dine In” to find out specials and make reservations. Bon Appetit! 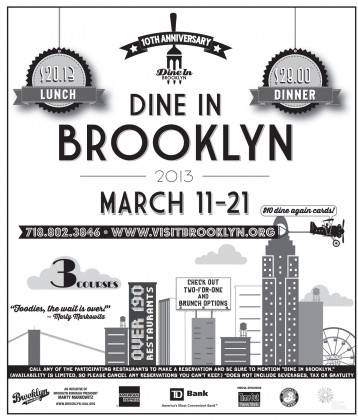