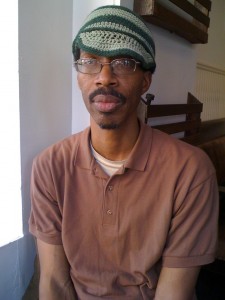 Chances are, you’ve heard his pitch before.

“Good morning, everybody. My name is Mark. I’m a local filmmaker here in the city. I make animated films and cartoons about this litter girl on my t-shirt; her name is Puddin’.”

Everyday, between 6 o’clock in the morning and noon, 46-year old Mark Stansberry rides the subways selling his DVD, which features six short, hand-drawn cartoons, to the people of New York City for, as he puts it, “a small donation of only one dollar.”

He’s right: one dollar is a relatively small donation, next-to-nothing for many subway riders. For Stansberry, it has meant the opportunity to live his dream.

Six hours a day on the trains over two years has netted Stansberry a distribution deal for Puddin’ with the digital media company The Orchard (he met the CEO on the subway); steady development meetings with NBC since November; and, he estimates, somewhere between $80-90,000 in cold, hard cash.

“When I started the trains, I wanted to make a little money for the films, support myself, buy supplies, and make more films,” he said. “But now it’s about the huge network, and the people, and the audience, and the brand that I’ve begun to build in the last few years.”

One-on-one, Stansberry, who has loved and practiced animation for as long as he can remember, is more low-key than he appears on the train. The tenor of his voice is softer, his diction less sing-songy and rehearsed. But he is no less passionate about Puddin’ today than he was back in 1994, when he created her.

“Earlier in my life I spent a lot of time in church, and got to see a lot of kids, a lot of little girls,” he said. “So I decided to design a character around one particular little girl, who used to always ask me for money and change in church.” 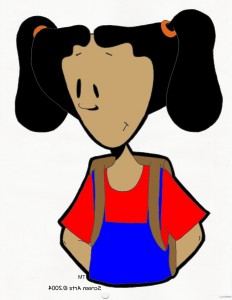 “Puddin’” was his wife’s childhood nickname, and the character, who is a ten-year old African-American girl, lives in a diverse Brooklyn community, though Stansberry never indicates exactly where. The cartoon also features her older brother Nate, her parents, and her best friend Ling, who is Chinese.

Though he was born and bred in Baltimore, Stansberry insists New York has always felt like home. He arrived here at the age of 19 and interned at a few animation studios, which, he says, “allowed me to look over other animators’ shoulders.” The rest, he says, he learned from books, and while he is respectful of technological advancements like 3-D and CGI, Stansberry prefers more traditional animation methods, and draws every single Puddin’ frame by hand.

The cartoons of the 1970s were, in his view, the height of entertainment, and he spoke wistfully about the days when parents and kids enjoyed these shows together. “Sunday nights, as a kid, the whole family would watch ‘The Wonderful World of Disney,’” Stansberry said. “That’s it. Everybody would watch the same thing.”

Talks with NBC have been difficult because they see Puddin’ as a kids’ show, whereas Stansberry thinks it has a wider demographic. “Based on the feedback I get from people,” he said. “It appeals to everybody, and everybody takes something different away from it.”

After years of weekly separation, Stansberry, his wife, and their eight children (four boys, four girls) are finally all under one roof in Williamsburg, Brooklyn. Up until last spring, Stansberry commuted between New York and Baltimore, staying at hostels in the city four days a week and going home on weekends, when he’d burn more DVDs to prepare for the following week’s subway sales.

Stansberry’s time on the trains has molded him into more than just an animator. He is now also a savvy marketing entrepreneur, and a New York City celebrity of sorts, having been featured in various local newspapers and radio programs.

“I don’t have much fear,” he said, but copped to feeling nervous before making his first official pitch on the subway. “I take a lot of risks, as an artist and financially. To me, that was just another risk: to look silly or stupid to some people.”

Most people respond positively to Stansberry’s approach, and he cited the 4 and 5 lines for their particular generosity. He is mindful that his selling tactic might bother straphangers, many of whom would rather be anywhere else at the moment he barges into their lives.

“People are surprised because it’s not the typical, ‘I need help,’ thing,” he said. “I always tell my wife, I wish I could tell people, whether they panhandle or whatever they do…never apologize for being there. That’s the first mistake.”

After all, if he’s learned anything, it’s that New Yorkers are not as hard as they seem. Just don’t tell them he said so.

Check out Puddin’ at Stansberry’s You Tube Channel