An Eclectic Mix at Steampunk 2011

Designers conjured up an eclectic array of fashions at the magic-themed Steampunk 2011 event held in the DUMBO Loft on October 23, which attracted a few hundred curious locals and long-time fans of the subculture and its imaginative aesthetic informed by Victorian styles and elements of science fiction and fantasy.

“I’m a science fiction fan from way back and steampunk is just another genre within the genre,” said Park Slope resident Presley Acuna. “This show was a lot of fun last year, so I was inspired to come again. In particular, the fashion part is really adventurous.”

Acuna and other intrigued onlookers crowded around the stage for the evening fashion show, which featured a diverse array of styles from four distinct designers. Kristin Costa and No Human Intentions presented elaborate fashions that embraced the steampunk aesthetic, while Alex London and Berít New York veered off into other genres with collections inspired by the Elizabethan era and the Middle Ages. 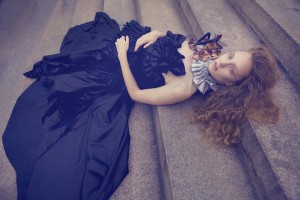 “I’m obsessed with the mystery around Queen Elizabeth I. She was so enigmatic, especially with the veils,” said London of the inspiration behind her Fall/Winter 2012 collection, “God Save the Queen” that was previewed at the show. Veils added a dramatic touch to her stunning pieces, which included full-length gowns and knee-length dresses made from extravagant fabrics such as brocade, jacquard, silk tulle, chantilly lace and velvet in regal hues of gold offset by somber shades of black. Fitted bodices and tailored jackets balanced the full skirts trimmed with lace and tulle, while the veils and dark feathered accessories added a macabre edge. Duality is at the heart of this collection that will be shown in full at New York Fashion Week. “I’ve always loved that with most women, and especially Queen Elizabeth, there is such a deep fragility that comes with the nature of being raised female,” London explained. “They’re so fragile, but they can just completely tear you apart because they’re also so vicious and powerful. It’s an interesting duality.” 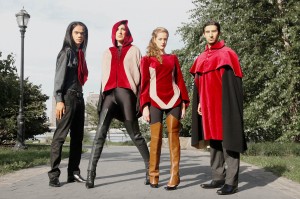 While London’s styles evoked the Elizabethan era, Berít New York explored the Middle Ages with core pieces for men and women from the Autumn/Winter 2011 collection, “Fairy Warriors.” Streamlined capes and tunics in contrasting tones of burgundy and fawn were paired with sleek black leggings and brown vinyl spats resembling leather leg armor. “I wanted it to be very luxurious,” said Brit Frady-Williams, the designer behind the Berít New York label. She used velvet and micro-suede to bring a sumptuous vibe to the collection, which was influenced by medieval times and fantasy fiction. “I always take a historical influence and mix it with sci-fi or fantasy elements, so there is that blend of themes and styles,” explained Frady-Williams, who drew inspiration from the costumes featured in the TV series “Legend of the Seeker” and movie trilogy “The Lord of the Rings.” In addition to the styles from the “Fairy Warriors” collection, Frady-Williams showed some steampunk-inspired pieces like layered skirts and corsets that were created specifically for the event.

“It really was a mix,” the Frady-Williams noted about the range of styles that she and the other designers presented. As the fashion show organizer, Frady-Williams did not dictate that the collections stay strictly within the confines of the steampunk aesthetic. “I didn’t limit the designers,” Frady-Williams explained. “This show was meant to be artsy and thematic.”

Variations on the steampunk theme could also be found at the event’s small market area, where the focus was primarily on jewelry and accessories. 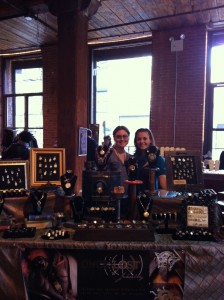 At the booth for Once Lost Jewelry, designer Michelle Harris showed off striking pieces made from repurposed antique jewelry and watches. Her signature pieces on display included enchanting pendants made of antique watch cases with shimmering bits of peacock feathers or butterfly wings in place of inner workings. “I’ll go out and hunt for things at antique shops and estate sales and I won’t put a piece together until I find that all the elements mesh really well, so sometimes it takes me a few years to get something perfect,” said the third-generation jeweler, who learned how to cast gold at an early age. Having produced her designs professionally for nearly 12 years, Harris was not even aware of the steampunk genre until about five years ago. “People started coming up to me and saying my stuff was steampunk, so I had to research it,” explained the designer, who started vending at steampunk shows soon after. 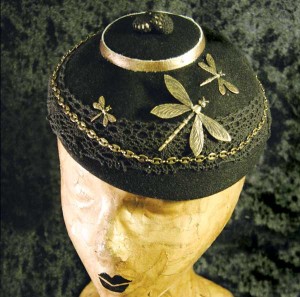 While Harris arrived organically at the steampunk aesthetic, headwear designer Anastasia Andino of La China Loca made a conscious decision to explore the genre after participating in the Steampunk 2010 event held one year ago at the DUMBO Loft. “I actually made a whole line in and around the steampunk aesthetic inspired by last year’s event,” Andino explained. “It was an opportunity to do more interesting, creative and fun pieces that I don’t normally do,” said the designer, who incorporated ruffles, metal bugs, pinwheels and cranks into the specialty line. The steampunk aesthetic has continued to influence Andino’s creations, although she has modified it somewhat to suit the clean lines characteristic of her brand. “I make it my own,” said the designer, whose sleek wool hats on display were punched up by feathers and metal adornments such as dragonflies and spirals. 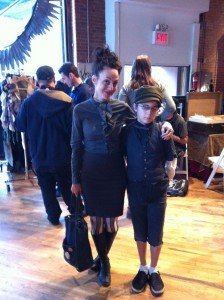 While longtime steampunk fan Acuna was disappointed that there were no ray guns in the mix, event attendees like Park Slope resident Lori Nelson were pleased with the selection. “I like this event because I feel like it is unique, but at the same time, accessible,” Nelson said.

“It’s an event for everybody. You can just be an onlooker and be curious and walk in to see what is going on,” explained Frady-Williams, who has produced annual steampunk happenings for the past four years with organizer Kathy Malone, owner of Clementine Events and founder of the now-defunct Brooklyn Indie Market.