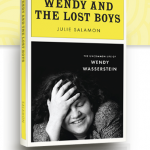 Like it or not, Wendy Wasserstein, playwright and essayist who died at age 55 in 2006, was the voice of her generation, or at least that subset of it that was female and well educated. The 70s and early 80s were a confusing time to be a young woman. In those days before the well-reported decline of men, women fought to be given responsibilities and pay. Watching and eagerly joining in the rise of second stage feminism, hers was the generation that thought women could have it all—good educations, interesting jobs, strong relationships, and above all, children when they were ready for them. Ready in terms of  careers and personal development, that is.

Older men acknowledged their skills, paid them less than they paid the men, and tried to make up the difference with compliments. Younger men saw them as sisters, but the competitive kind, younger siblings threatening to skip into their grade. All of them laughed at the women, and that was hard to take: was it any wonder that the women’s movement got a reputation for not having a sense of humor? Wendy Wasserstein was the first major cultural figure to reflect the confusion in such a funny way. Her essays sparkled; watching “Uncommon Women and Others” was like listening to a late-night conversation with your college friends. She won the Pulitzer and a Tony; she was a celebrity in demand as a speaker; she was a mentor to young actors and playwrights.

Her life provided her material and Wasserstein, quoted by Salamon, said it best: “Funny is a complicated issue.” The life, as reported in this new biography, was messy and secretive. There were family secrets, including an institutionalized older brother (he was either developmentally disabled or mentally ill; Salamon conflates the two) whose existence was kept from Wendy for many years. Successful in many ways, Wasserstein never married, apparently an issue for her mother (her brother Bruce, on the other hand, married four times). Her many accomplishments never seemed to satisfy her demanding mother. At 48 she conceived a child, who was born prematurely. And Salamon reports that Wasserstein selectively kept and disclosed secrets in her chosen family of friends, former lovers, and unattainable but supportive gay men.

Salamon deconstructs the personality Wasserstein showed publicly in her essays and journalism, and identifies large gaps between the representation and the truth, but she never successfully puts the full picture together. Two sides of Wasserstein come through. Salamon regards the grown-up Wendy as a wild child, someone who needed looking after and who left behind something of a mess, unhappy friends and a very young daughter. But Salamon also reports that Wasserstein identified literary executors and made plans for her daughter. The impish giggling funny woman who could turn into a savvy negotiator for herself seems to be a reasonable development from the beginnings Salamon has identified. The selfish, guarded woman, quick to take offense at a perceived slight, comes out of nowhere. Salamon does not integrate them, and as a result this biography, while telling what should be a fascinating story, leaves an unfortunate hole at its center. And the book is not helped by the wooden writing or the lengthy excerpts from documents like a Mount Holyoke College memo about the broadcast of “Uncommon Women.” This is not the biography that Wendy Wasserstein deserves.

Have a  book you want me to know about? Email me at asbowie@gmail.com. I also blog about data issues.