Brooklyn Bugle Book Club: “I Am Forbidden” by Anouk Markovits 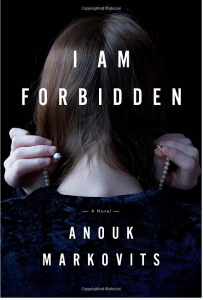 Hungary, a former part of the Habsburg Empire, was an Axis power during World War II, and Romania, which started out on the German side, successfully switched to the Allies after a coup d’etat. Jews in both countries, and in the area that lay between them, Transylvania, were not subject to Nazi deportations and extermination efforts until late in the war. So those who escaped the roundups, or were hidden by family servants, did not have to hide for so long. It’s entirely plausible that two children might have survived despite the murders of their parents and siblings.

Josef Lichtenstein, aged five, lay undiscovered under a table after the murders of his parents and baby sister. The family’s domestic, Florina, took him in, cut off his peyases, and raised him as a Catholic. One day Josef watched as a Jewish couple ran out of their own hiding place and were captured, the wife killed, the husband tortured. Joseph found, quieted, and comforted the couple’s very young daughter, Mila, and sent her to safety. Mila fetched up with the family of Zalman Stern, a Satmar Hasid and follower of the Satmar Rebbe Joel Moshe Teitelbaum. After the war, Josef returns to his Jewish community, and follows the Rebbe to Williamsburg, Brooklyn, where he is first a student and eventually becomes a valued member of the Rebbe’s Court. The Sterns, with Mila, emigrate to Paris after the war. The Satmar Hasids live rigorously structured lives, abiding by the Rebbe’s strictures and marrying within the community. Josef finds Mila in Paris and brings her back to Williamsburg after they marry.

The Rebbe plays a key role in the story. Back in Transylvania, Mila’s mother left her hiding place because she saw the Rebbe sitting in the open door of a boxcar. Could this have happened? Teitelbaum who has been described as “the most virulently outspoken anti-Zionist rabbi who ever lived,” allowed himself or, as Markovits recounts it, begged, to be placed on a rescue train to Switzerland – negotiated by a Zionist, the cost of safety for the few was the lives of the rest of the community.

This act, pious but barren Mila thinks, was good cloaked in evil. She tells herself, quoting from a commentary in the Midrash, “It is sometimes necessary to shroud a holy act in sin.” Ten years into her marriage with Josef, with no sign of children, she is increasingly desperate to conceive. She undertakes an act that I found extremely unlikely, (perhaps it was meant to be a metaphor?) but that results in a child, and sets off the events of the second half of this compelling novel.

Markovits is extremely good at conveying the arcane rules governing the world of Satmar women, particularly those around study, and those around sex. And in the parallels she draws between the acts of those who worship and protect the Rebbe, and those Mila takes to conceive and then protect her family, she draws a larger lesson: where there is complicity, there can be no absolution. This compelling novel is not as layered and complex as the novel by that name I recently reviewed, but reading the two books together suggested some surprising parallels. Do you agree? Let us know what you think in the comments.